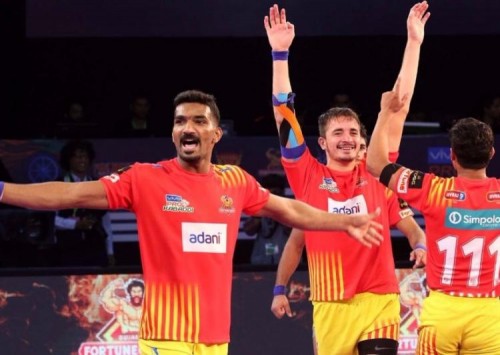 Zone A team Gujarat Fortunegiants came from behind to defeat Bengaluru Bulls 27-24 in an inter-zone Pro Kabaddi League (PKL) contest here at the Transstadia Arena to register their fourth victory on a trot in the league.

Raider Sachin Tanwar (4 points) and defender Parvesh Bhainswal (4 points) helped Gujarat comeback from lagging behind in the first-half to register a win by narrow margin to stay on top of their group standings.

After couple of empty raids from both sides, Gujarat broke the deadlock with a successful tackle to get the scoreboard ticking.

The home side looked to gain momentum in the match after getting all-out. Raiders Sachin and Rohit Gulia pulled off consecutive successful raids to help their side narrow the point gap after lagging behind in the early minutes of the match.

Bengaluru also opened their score tally with a successful tackle. The away side took the initial 4-2 lead, thanks to successful tackles from skipper Rohit Kumar and fellow raider Ashish Kumar.

Rohit continued to display his fine show on the opposition mat with help of his fast pace, agility and movement to add vital points to his team’s tally and maintain the lead.

The Bengaluru outfit also pulled off some fine tackles to all-out the home side taking a 11-3 lead with less than nine minutes to play in the first-half.

Thanks to an all-round effort, Bengaluru maintained a 14-9 lead at the half-time.

The second-half began with Gulia clinching a point for Gujarat Fortunegiants. Later defenders Fazel Atrachali, Parvesh Bhainswal and Abozar Mighani combined in unison to give their side important tackle points which helped the team narrow the point gap to 18-20 with nine minutes to play.

Substitute Mahendra Rajput and Sachin later played an important role clinching back to back successful raid points to comeback in the match giving their side a slender 24-21 lead with less than five minutes to play, which later helped the side clinch the match.

The Bengaluru outfit added to their lead with a successful tackle, which was followed by a successful raid from Rohit which earned the team two points.

The away side soon looked to display a failed show with their unsuccessful raids and tackles helping the opposition take lead in the match.

Later, substitute Gurvinder Singh kept Bengaluru in the match through his successful raids but failed to rescue his side from losing all on his own.