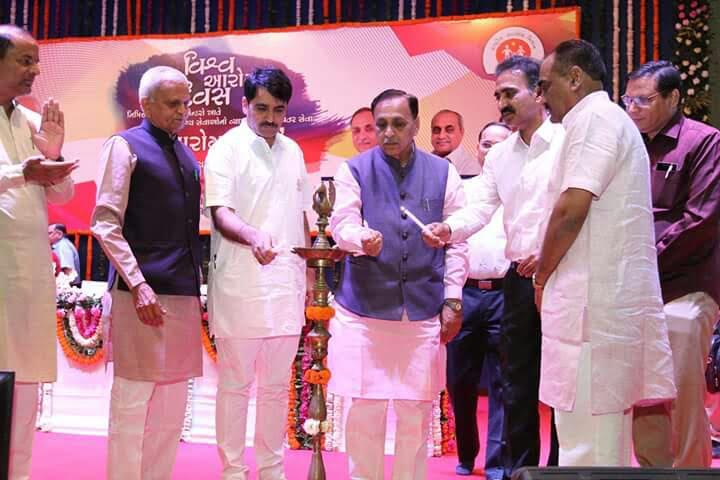 Gujarat Chief Minister Vijay Rupani on Friday today launched an innovative statewide result-oriented Arogya Setu programme, to set up dispensary in each and every village, to reach out to the last man in the last mile.

Speaking at a function here to mark digital launch of the programme on the World Health Day, he said that the State Government planned to appoint 12,000 doctors and 30,000 paramedical staff at the taluka-level Health Centres and at the village-level Sub-Health Centres. Taking a cue from initiatives started by Prime Minister Narendra Modi when he was Gujarat’s Chief Minister, CM Rupani said that the government has this year allocated over Rs.9,000-crore for Health Department in Budget to bridge the gap between health services and the people, through ‘Arogya Setu’. The objective is to build disease-free and strong villages, from a strong and developed Gujarat to strong and developed India. However, a lot has still to do. In the past, he recalled, even if there were hospitals, there used to be perpetual shortage of doctors, medicines and equipment. The government has also initiated efforts to increase medical seats in the state from 3,500 to 5,000, set up medical colleges in tribal areas, produce more super specialty doctors, and encourage medical tourism.

Giving details of the ‘Arogya Setu’, Minister of State for Health Shankar Chaudhry said that doctors would initially visit the villages twice a week to check common diseases at village level itself. The government would also try to provide medicines at affordable prices through Pandit Deendayal Generic Stores. The aim is to open 500 generic Stores by this year. He said that CCTV cameras would be installed at government hospitals for the safety of doctors.

Health Commissioner J.P. Gupta in his welcome address said the government’s latest initiative is to provide a three-tier health service. He said that WHO has given ‘Depression: Let Us Talk’ as this year’s theme for the World Health Day. Director of Health Paresh Dave proposed a vote of thanks.