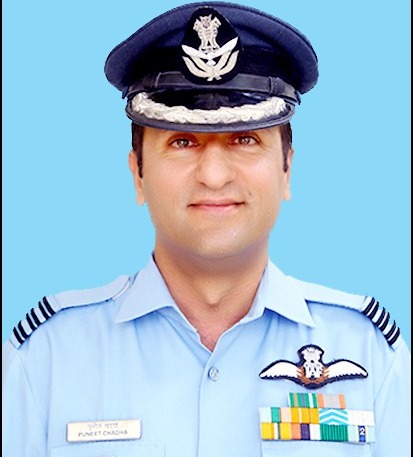 Wing Commander Puneet Chadha has taken over as the Public Relations Officer under Ministry of Defence on 01 Apr 2019 at Shahibaug Cantonment, Army Station, Ahmedabad. A qualified flying instructor he has more than 3000 hours of flying on various aircrafts and also took part in various relief operations all across the country.

Commissioned into the Indian Air Force as a pilot in Dec 95, he hails from Jammu and studied at Udgam School for Children and St Xavier’s, Loyola Hall, Ahmedabad. He is also an alumnus of the prestigious National Defence Academy and Defence Services Staff College, Wellington.

He is a Qualified Flying Instructor with more than 3000 hours on various aircraft which include MiG 21, Mi 8, Mi 17, Mi 17 IV, HPT 32, TS 11 Iskra and the Chetak.  He has flown extensively as a medium lift helicopter pilot during Operation Parakaram and in support of Counter Insurgency Missions in the North and the North East.

He flew as a rescue pilot in various disaster relief operations with the prominent ones being Super Cyclone at Orissa, Tsunami relief operations at Sri Lanka, earthquake relief ops at Uri and flood relief in Gujarat. As a member of the UN Peacekeeping Force (MONUC) at Congo, he flew extensively in the conflict zone under chapter VII of the UN charter.

With a back ground of three Masters in History, HRM and Defence and Strategic Studies, he intends to showcase the achievements of the armed forces before youth and industry.