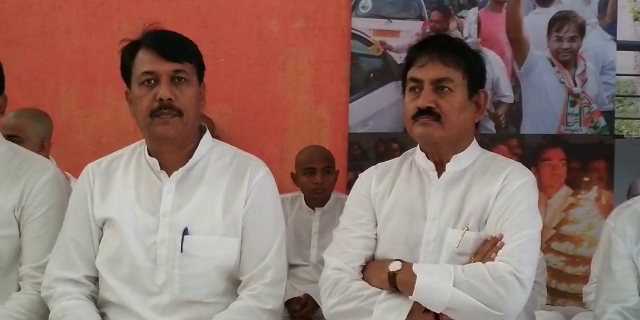 Gujarat Congress president Amit Chavda and senior leader Bharatsinh Solanki said every exit poll will be proved wrong on 23rd May and UPA once again comes to power at the centre. Both the leaders are in Vadodara for a condolence meeting of VMC councillor Jitendra Thakor.

Amit Chavda said every exit polls will be proved wrong and they strongly believe Congress will form government at the centre. Party will also win 10 seats in Gujarat. He said present Gujarat goverment fails to provide water fodder and they are doing the survey on the same. He threaten for agitation if the government fails to resolve the issues at the earliest.

Former party president and senior leader Bharatsinh Solanki said the exit polls showing the majority towards NDA will fall flat as happened during the time of Atal Bihari Vajpayee government. People vote against BJP as they fails in every way in last five years and Congress will win more than 14 seats in Gujarat this time.

Both the leaders came to Vadodara for the condolence meeting of Jitendra Thakor and said it’s a big loss to the party and family as they are into social work for so many years. They met the family members and paid their respect to the departed soul. City leaders and members were present during the condolence meeting.