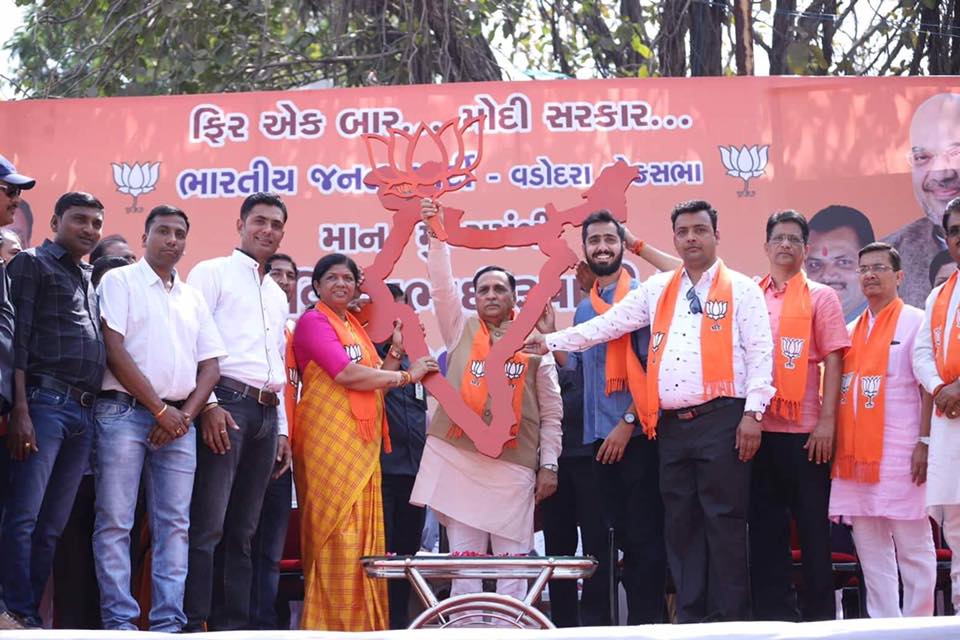 Said this time election is special as it is fight between the Chowkidar and Chor.

Gujarat CM Vijay Rupani call the people of Vadodara to vote again for the BJP and help their candidate Ranjan Bhatt to win with record margin. He said this time election is special as it is the fight between the Chowkidar and Chor. The CM accompanying Bhatt from Jubilee Baug towards the office of election commission in form of a rally and then submitted her nomination form.

CM Rupani addressed a public meeting before the rally and call the people to vote for better governance. He said this time elections are very important as its the fight between Chowkidar and Chor, terrorism and supporting the terrorists, India and Pakistan, Nationalism and family and appealed the voters to bring Modi government again.

He called the people to vote for Ranjan Bhatt and help her win from record margin this time. He attacked the opposition by saying if Congress came to power by chance then the celebration will be in Pakistan. He said Congress didn't remember the poor in their 50 years of ruling and now Rahul Gandhi is luring them by promise to give 75 thousand. Narendra Modi government is already starting to think about the poor and introduced many schemes for their benefit. However in past leaders like Jawaharlal Nehru, Indira Gandhi, Rajiv Gandhi failed to kept their promises.

He said PM Modi gave a befitting reply to the terrorists after the Pulwama attack and fulfill his promise before the people of the country. However the top Congress leaders are asking for the proof of the attack and insult the Armed Forces.