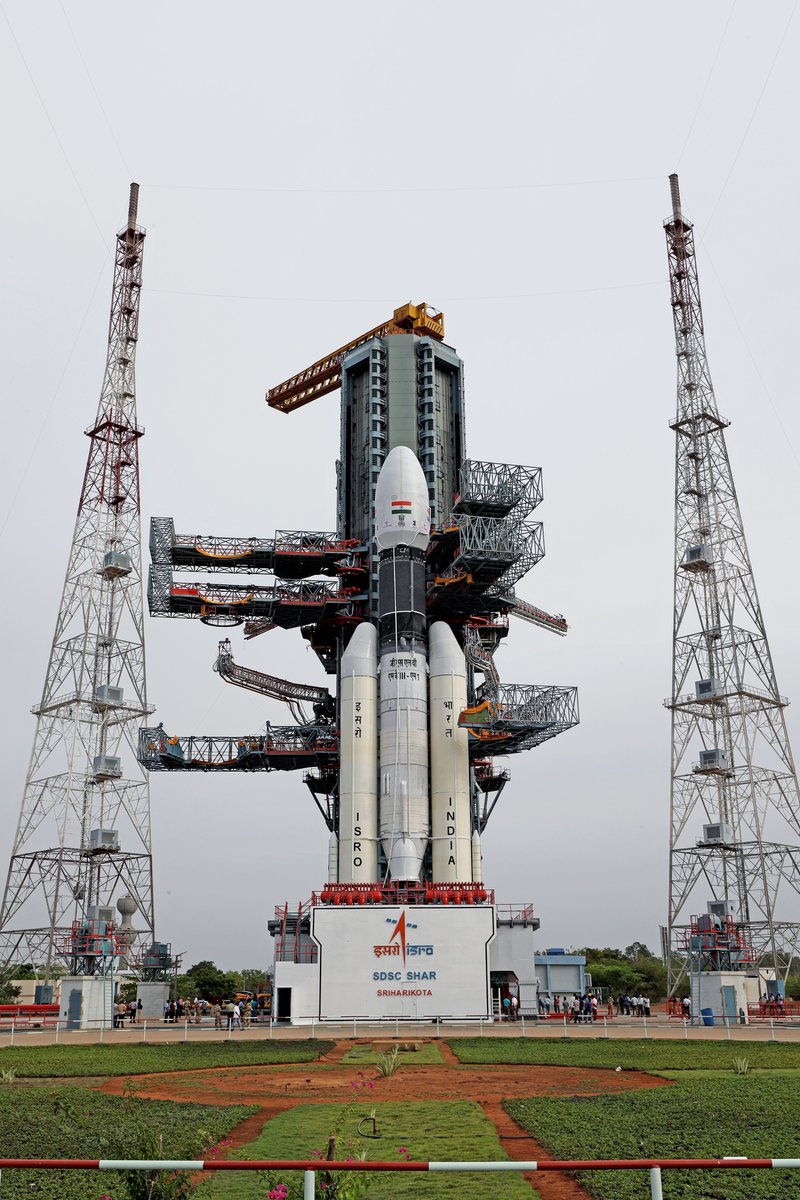 "Preparations are going at a hectic pace at the Satish Dhawan Space Centre in Sriharikota for the July 15 early morning launch at 2:51am. Everything is progressing normally," said an official of Indian Space Research Organisation (ISRO), detailing the launch date and launch time.

About 16 minutes into its flight, the Rs. 375 crore GSLV Mk III rocket will put into orbit the Chandrayaan-2 spacecraft.

While ISRO officials call the 640-tonne GSLV Mk III rocket as 'fat boy', the Telugu media nicknamed it 'Baahubali', as like the hero in the successful film lifts a heavy Lingam, the rocket will carry the 3.8-tonne Chandrayaan-2 spacecraft.

The spacecraft's orbit will be raised by a series of manoeuvres to put it on Lunar Transfer Trajectory.

On entering the Moon's sphere of influence, on-board thrusters will slow down the spacecraft for Lunar Capture.

The Rs. 603 crore Chandrayaan-2 consists of three segments - the Orbiter, the lander-Vikram and rover Pragyaan.

According to ISRO, on the day of landing, the lander Vikram will separate from the Orbiter and then perform a series of complex manoeuvres comprising rough braking and fine braking.

Imaging of the landing site region prior to landing will be done for finding safe and hazard-free zones.

The Vikram is expected to finally land near South Pole of the Moon on September 6, 2019 and carry out three scientific experiments.

The Indian space agency said the lander will get separated from the Orbiter four days after the former enters the lunar orbit. Vikram will soft land from a height of 100 km from the Moon's surface.

Subsequently, the six-wheeled rover Pragyaan will roll out and carry out two experiments on lunar surface for a period of one lunar day which is equal to 14 Earth days.

The Orbiter with eight scientific experiments will continue its mission for a duration of one year.

The mission also has one passive experiment from the US space agency NASA. The Indian space agency said the mission will also try to unravel the origins of the Moon.

Interestingly, the lander as well as the rover will have the Indian national flag painted on them. Ashoka Chakra will be imprinted on the rover's wheels.

The success of Chandrayaan-2 mission will make India the fourth country in the world to land and ride on the Moon surface after the US, Russia and China.