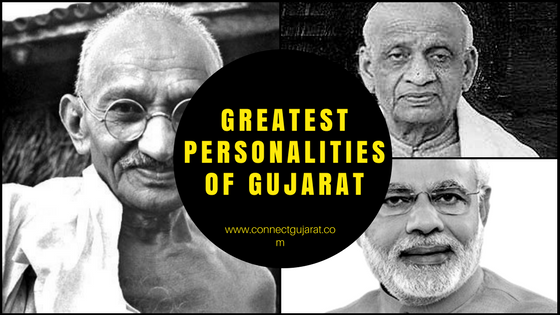 Our country has seen a lot of hardships in becoming what it is today. With contribution by great personalities from all over the country, it has emerged to be one of the best nations, a democratic one, in terms of richness in values be it traditional, economical or political. And some of the great personalities that have made their presence felt in the nation are from Gujarat, which has predominantly made Gujarat what it is today. Listed below are few such people who have already received immense love and recognition.

Popularly known as Sardar Patel, he was the 1st Deputy Prime Minister of India. He was a statesman and a barrister, and also the senior leader of the Indian National Congress. He played a pivotal role in our country’s struggle for independence.

Though this great personality does not need any introduction, he is famously known as the FATHER OF THE NATION for his practice of nonviolence and freeing India from the rule of the British Empire. A lawyer by profession, he had faced a lot of brutality during the freedom movement.

Currently the Prime Minister of India, Modiji (as lovingly called) rose to prominence from being a tea vendor to becoming one of the most powerful leaders of the world. His hard work and sheer determination, with capabilities of debating skills and love for theatrical productions, has inclined his political image in a positive way.

Son of businessman Dhirubhai Ambani, Mr. Mukesh Ambani has touched every life in India and overseas. He is the chairman and managing director of the Reliance Industries Limited and has been on the list of top richest people of the world in the Forbes list.

An Indian banker, he is the executive vice chairman and managing director of Kotak Mahindra Bank. He decided to start his own company when India had a closed economy back in the 80s, refusing job offers from multinational companies. By creating the Kotak Mahindra Bank, he has offered various people financial services and freed people from instant burden.

These were the few prominent personalities, but to see to it, there are many more great personalities from Gujarat that have made the state what it is today. Flourishing and capable at various fields, Gujarat sure has produced gems.