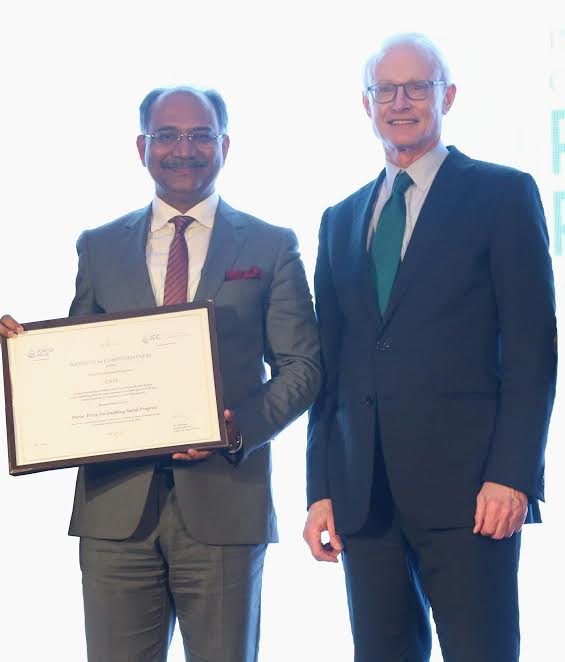 Gujarat Narmada Valley Fertilisers & Chemicals (GNFC) won theprestigious Porter Prize supported by the Harvard Group for itsrevolutionary and innovative Neem Project. The Porter Prize is named after Michael Eugene Porter, one of the only 26 Harvard University Professors along with Nobel Laureate Prof. Amartya Sen to be conferred the special designation of ‘University Professor’.

Prof Porter is well-known for his theories on economics, business strategy, and social causes. The Porter Prize was established to recognize companies on the basis of their contribution to value creation, innovation, and strategy. It is instituted and administered by the Institute for Competitiveness, India, which works in affiliation with Harvard Business School, USA.

The Award was received by Dr. Rajiv Kumar Gupta (IAS), Managing Director, GNFC from Prof. Porter at a gala ceremony organized in Mumbai on 24th of May 2017 at the Taj Mahal Palace, Mumbai. The event was attended by distinguished business leaders from across sectors.

GNFC is the first public sector company in India to be honoured with this recognition. Fulfilling the vision of Honourable Prime Minister on Neem coated Urea, the Neem Project successfully orchestrated a synchronization between a policy requirement of the government of India, business need of GNFC and the socio-economic needs among the rural poor. To fulfil the policy mandate of 100% Neem coating of Urea, GNFC began a backward integration process and involved the rural poor, mostly landless labourers with focus on women, in seed collection. This resulted in the creation of shared value through the manufacturing of Neem oil through the seeds collected, helping fulfil the policy mandate. At the same time, it resulted in the upliftment of poor rural population by generating income for farmers, women, poor and landless labourers through the neem seed collection process.  The surplus neem oil has been further used for forward integration of Neem oil based products.

Receiving the award, Dr. Rajiv Kumar Gupta, MD, GNFC said, “The biggest highlight of the project has been to establish a viable business model which has led to social transformation. The Neem Project has been able to create a value chain which is now exponentially multiplying value creation in the lives of numerous people, especially the most poor and vulnerable. The model adopted by GNFC has motivated many companies to come forward for similar shared value generation projects. We are providing support to them to implement this project in other states.”

According to Prof. Porter, the central premise behind creating shared value is that the competitiveness of a company and the health of the communities around it are mutually dependent. Recognizing and capitalizing on these connections between societal and economic progress has the power to unleash the next wave of global growth, to redefine capitalism and to unleash a wave of innovation. The synthesis of “rigorous analysis”, “tough-minded decisions” and “hard choices” all combined into a meaningful whole ensures that sustainable competitive advantage is created in advance by studying the structure of an industry.

Porter Prize is named after the leading authority on competition & strategy, Professor Michael E. Porter. Prof. Porter, from Harvard Business School is widely acknowledged as the most influential business strategist, economist, and author; well-known for his theories on economics, business strategy, and social causes.

The award has been instituted by the Institute for Competitiveness, India Chapter affiliated to the Harvard Business School.