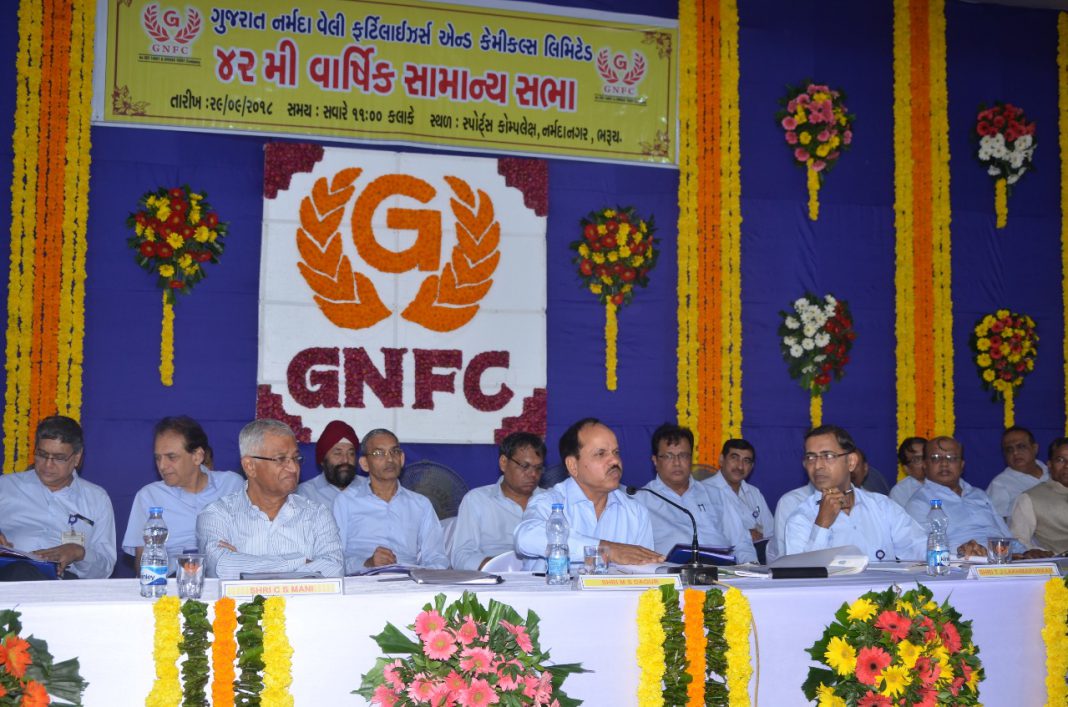 GNFC ( Gujarat Narmada Valley Fertilizers & Chemicals Limited ) declares 75% dividend to the share holders in the 42nd Annual General Meeting held at Bharuch on Monday.  M S Dagur, Managing Director, GNFC, chaired the AGM and announced the dividend which is highest ever in the 42 year of history of GNFC. Shareholders present there in welcomed the announcement wholeheartedly.

Addressing the AGM M S Dagur gave overall view of global and Indian economic trends. Quoting the World Bank he pointed out that the Gross Domestic Products (GDP) of India is likely be 7.3% this year and

7.5% in next financial year. In the financial year 2017-18, GNFC made more than 186 records on production and marketing fronts. Most plants of the company operated at more than 100% production capacity, which has resulted in the highest ever production of Formic Acid, Acetic Acid(Glacial), Aniline and Tolune Di –isocyante (TDI).

GNFC’s IT division (n)Code solution also achieved sales turnover of Rs. 174 crore and reported profit of 39.53 crore. Describing the inclusive growth of the company Dagur said, “NEEM Project which was launched in 2015 with an aim of empowering rural and landless people, especially women, has benefited thousand of rural poor women. Various Neem based products such as Neem Soap, Neem Shampoo, Neem Hand wash are providing direct and indirect employment to rural masses. To meet the increasing demands of the various Neem products, we are establishing the Neem soap making unit with a production capacity of 10 MT/day, along with large scale of Neem oil extraction facilities.”

M S Dagur also shared the various initiatives taken by GNFC in the field of environment protection, Energy savings along with various projects under Corporate Social Responsibility (CSR) by the company.

He expressed his gratitude towards the shareholders, Distributors, Customers, Business Associates, employees, Partners and various government departments for their contribution in the success of the Company.