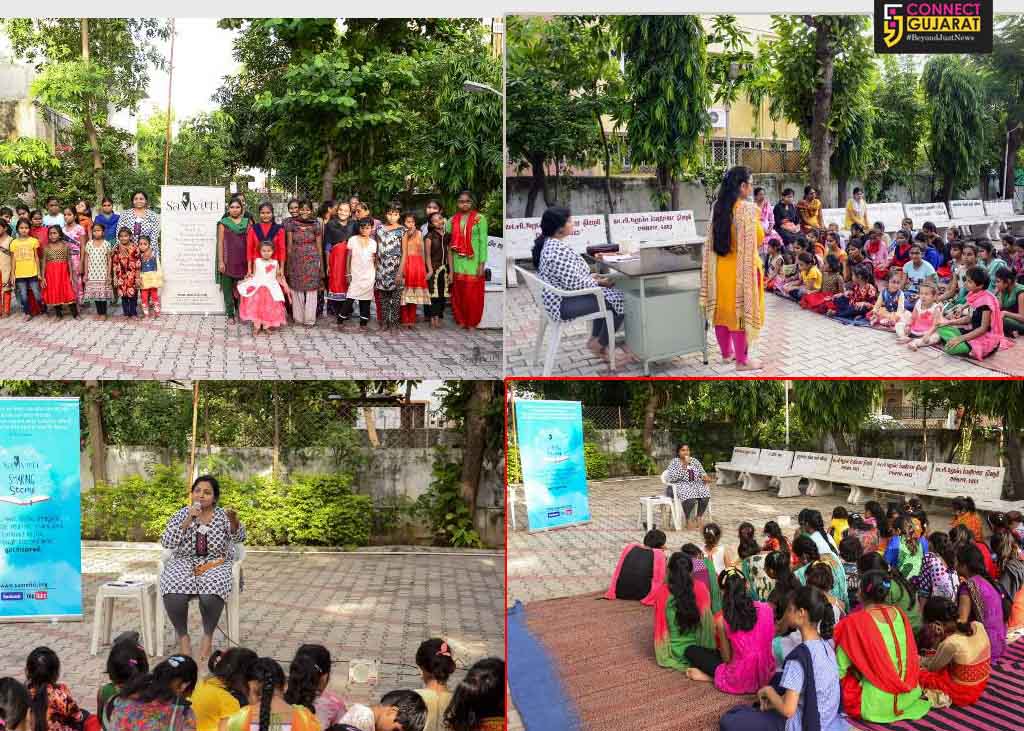 SaMvitti organise the session on the story of Surdas and Krishna

Devotion of Surdas towards Lord Krishna shows us how one can find eternity through sheer dedication and efforts. Success is a continuos effort and the Story of Surdas teach us the same as he found his Krishna by his never ending Bhakti.

SaMvitti foundation Organise a session at Lions Blind School in Vadodara where the young girls listen the self conceived story of Surdas and Krishna – a unique relation shared by Hetal Pathak. The session brought joyfulness and a sense of divine power in the participants.

The story is based on the life of poet ‘Surdas’ who was blind but very sensitive and utterly talented. As his father was a singer he too was blessed with the legacy of music and literature. At a very young age he left his home to walk on the path of worshipping Lord Krishna. He felt tremendous pain by the fact of him being far-away from Lord Krishna and that pain could be felt in the lyrics of his bhajans (usually written in Braj Bhasha).

Such visualisations of Lord Krishna’s childhood experiences inspired Surdas to relocate to Vrindavan. It so happened that on the way to Vrindavan he fell into an empty well and for three days he survived in that well without food and water by worshipping Lord Krishna. After three days Lord Krishna came as a young child and held his hand and pulled him out of the well. Both together continued the journey further.

On the way, while stopping to take rest in a village, they couldn’t find food, so Lord Krishna stole food from the Radhe-Krishna temple but the blame of it came on Surdas. Lord Krishna somehow saved his devotee and they stayed in a hut for that night. After this incident, many challenges came-up to test the devotion of Surdas but Lord Krishna always helped him to honour his devotion.

Surdas’ lilting music and fine poetry attracted many laurels. As his fame spread far and wide, the Mughal emperor Akbar became his patron and invited him to sing bhajans in his durbar. Pleased by his singing, Akbar gifted him a ‘Navratna Haar’ which Surdas dedicated to Krishna. The emperor found this insulting and on knowing that Surdas requested Krishna to return the necklace. Krishna in return gave a bunch of necklaces which swayed everybody’s eyes.

In the Durbar of King Akbar – “Wo kaala ek bansari wala, sugh bisra gaya mori re…”

The session creates the sense of devotion and sensitivity in the participants as all of them recited the melodious bhajans were with joy and compassion. They relate to the conviction and dedication of Surdas to meet Lord Krishna. The excitement and curiosity were seen in their expressions and in their responses. At the end of the session they led to think about the persona of Surdas.

Participants could identify that true intention, dedication and purity of soul get the power from divine energy to achieve what they want.