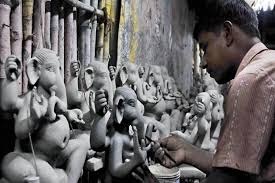 With the increasing tensions at the border regarding China there is a widespread protest in the country by political parties and various organisations demanding to ban Chinese products. In Vadodara also organisations protest against using Chinese items and gives memorandums in this regard to the collector.

Jumping in the fray is now the Ganesh Mandals of Vadodara as they decide not to use the Chinese products in the upcoming 10 day Ganesh festival. Organisers of popular Pratap Margha Ni Pol Sarvajanik Ganesh Utsav take the initiative to ban Chinese products in their celebration this year. They also cancel the advertisement of a Chinese mobile worth1 lakh already approved.

“Every year before the festival big Ganesh Mandals in Vadodara city approach big companies for advertisements before the start of festival. This year also they approached the companies for advertisement and already received one worth 1 lakh approved. However we cancel the advertisement as its about the Chinese mobile and due to the increasing tensions on border due to China we decide to ban use of any type of Chinese products in our pandal this year,” said Jay Thakor President of the mandal.

“Chinese products everywhere in the market be it decorative items, lights or other things. This year we decide to use only Indian items in our celebration even purchasing them at extra cost. We decide not to use a single Chinese product anywhere inside the Pandal or elsewhere,” said Thakor.