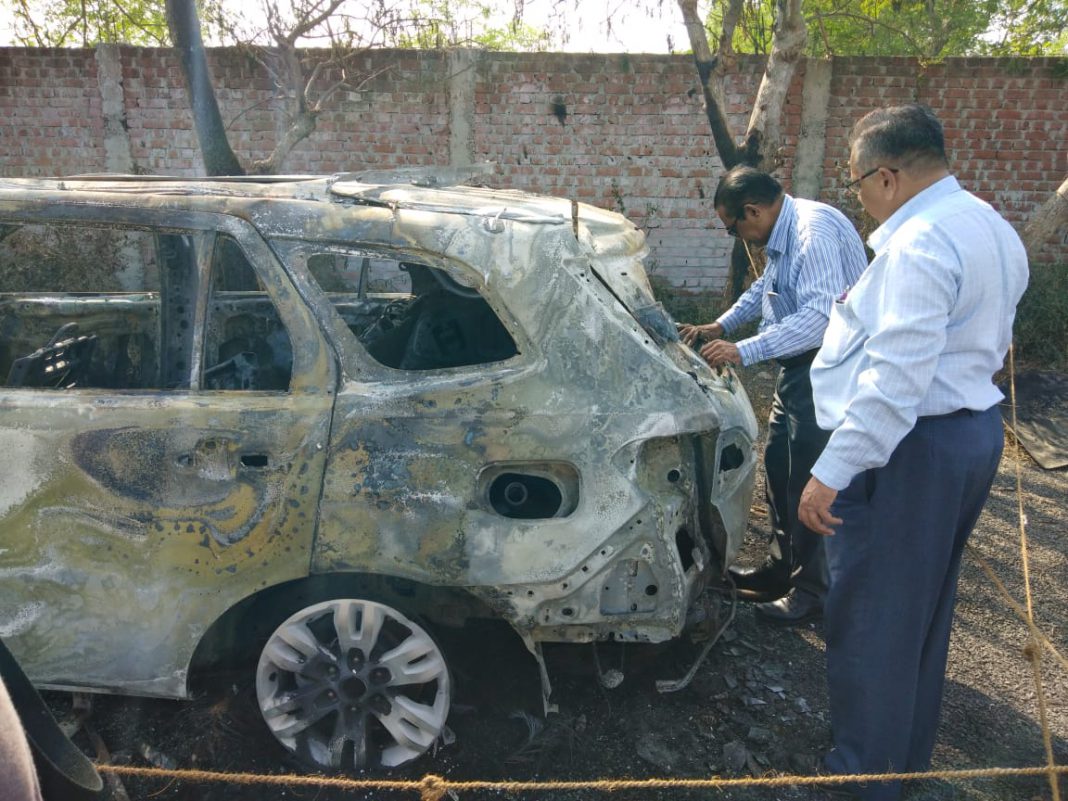 Forensic teams from Vadodara city and district take samples of the SUV burnt under mysterious circumstances on Tuesday. A city builder Mihir Panchal was burnt alive inside the vehicle as he failed to come out from the vehicle in time. However in view of various theories the investigative agencies visit the spot and collect important samples to know the exact cause of ill fated incident.

The luxurious Ford Endeavor went up in flames near Khanpur which killed Mihir Panchal as he failed to came out in time. However many theories comes up after the incident and point finger on the killing of Mihir Panchal. On Wednesday the City and district FSL teams reached the spot and collects around 10 samples from the SUV to check the cause of fire in the SUV have high safety rankings.

Uncle of the deceased Natwar Parmar raised finger on the incident and said it was not an accident and they believe someone killed him and put him inside the vehicle. He demand a thorough investigation in the matter as the death of Mihir is big loss to the family and his society.

City FSL officer R.S. Gondaliya and district FSL officer Bhavini Panchal reached the spot with their teams and Investigate the burnt SUV and the area. They took around 10 different samples from there for checking to know the exact cause of the incident. The FSL teams prima facie feel short circuit be the reason but the exact cause will be clear after the laboratory report.

Insurance company surveyor Prakash Parikh also reached the spot said the rear wheel of driver side caught fire but the exact point will be clear after the FSL report.

Leader of opposition in Gujarat assembly Paresh Dhanani also reached Vadodara and meet the family of his childhood friend Mihir Panchal and console them. “I lost my childhood friend and and a very dear person in the ill fated incident. It’s very sad to know the cause of his death but the FSL report will clear the things,” said Dhanani.

The last rites of Mihir Panchal was performed inside Wadi crematorium.