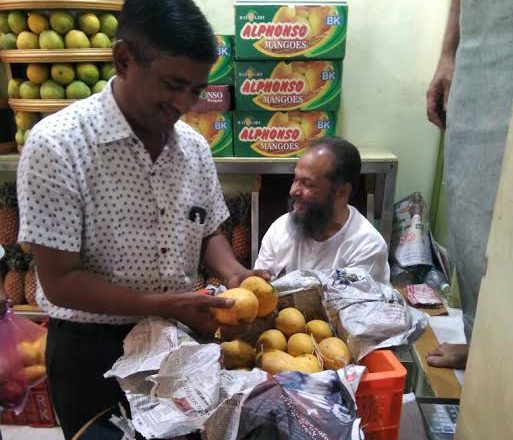 The fruit vendors behind Khanderao market in Vadodara promised in written to the VMSS health department not to sell fruits ripen with the help of Carbide and Ethinil powder. The 54 vendors promised the same to the officials reached there to check the quality of the fruits. After the written promise the VMSS team only destroyed the rotten mangoes. After the onset of summer the fruit vendors are using Carbide and Ethinil powder for ripe the mangoes and other fruits. To earn profit in the expense of people’s health the fruit vendors are selling the fruits including mangoes with any fear. However the VMSS health team started to cracked on such vendors and with the recent Gujarat High court notification the checking is intense and the vendors are in fear as if caught legal steps will be taken against them as directed by the high court.

After the direction by the court the VMSS health department cracked on such vendors who use the dangerous Carbide and Ethinil powder to ripe the fruits. The health teams also served notice to the vendors who were caught red handed and strictly warned them about legal steps and seal their shops and godowns. However the fruit vendors promised not to use the powder again and give it in written to the VMSS health department. Further if they were caught using the powder then they can take legal steps and seal their shops and godowns.