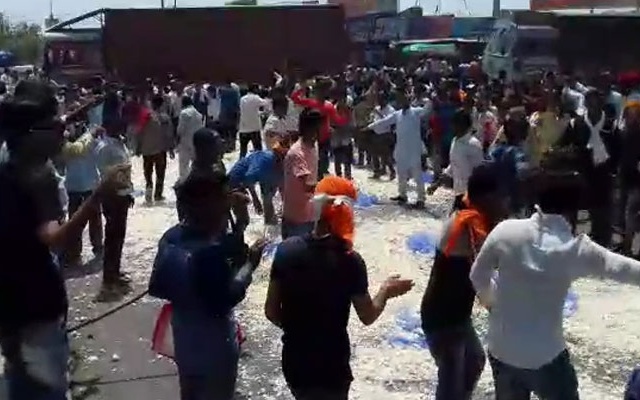 Hundreds of angry farmers on Wednesday blockaded roads and attacked two top officials at Mandsaur in Madhya Pradesh as their leaders claimed that eight people died in police firing a day earlier.

Mandsaur District Magistrate Swatantra Kumar Singh and Indore Superintendent of Police O.P. Tripathi were roughed up by a mob when they reached Barkheda Pant in Mandsaur where farmers were squatting on a road with the body of one of those killed on Tuesday.

Singh and Tripathi wanted to talk to the farmers in a bid to persuade them to end their protest but the attempt backfired.

Singh was chased by the farmers, with some repeatedly hitting him on the head. Tripathi had a tough time too. Police reinforcements which rushed to the spot rescued both the officials.

“The situation is tense but under control,” a senior official said on Wednesday.

The farmers allege that the Madhya Pradesh Police and the Central Reserve Police Force (CRPF) deliberately opened fire at them when they were protesting on Tuesday. Seven farmers were also wounded in the firing.

Police said that it were the farmers who triggered the violence.

The farmers retaliated by torching more than 30 vehicles. In a desperate bid to bring the situation under control, authorities imposed curfew late on Tuesday in parts of Mandsaur district.

An official said the curfew would remain in force until further orders.

Leaders of three farmers’ organisations alleged at a press conference in Indore that the number of people killed in police firing on Tuesday was eight and not five. One of the dead was a college student.

Representative of the Rashtriya Kisan Mazdoor Sangh, Aam Kisan Union and Bharatiya Kisan Union accused the government of spreading canards about the farmers.

Aam Kisan Union founder Kedar Sirohi said: “By branding us anti-social elements, the government is adding fuel to the fire. On the one hand the government has unleashed repression on us, and on the other it is trying to defame us.”

Sirohi warned that if the situation did not change immediately, the farmers would resort to a “jail bharo” campaign across the state.

“And in all the 53,000 villages of the state we will take out a mock funeral of Chief Minister Shivraj Singh.”

The Congress party extended support to a shutdown called by farmers in Madhya Pradesh on Wednesday to denounce the firing.

Farmers in Madhya Pradesh have been on strike from June 1 to June 10 to demand that their loans be scrapped and that their produce should be bought at a fair price.