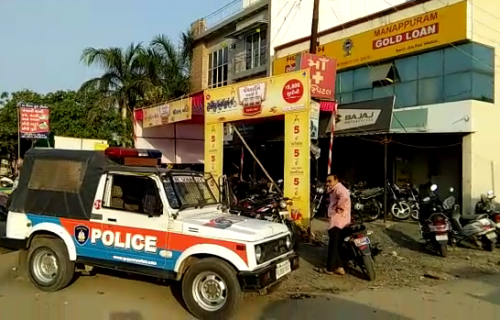 Accused fled after siren blown inside the office

Four unknown persons attempt a robbery inside the Mannapuram Gold office at Ajwa road in Vadodara on Monday evening. However the timely siren inside the office save them and force the robbers to fled from the spot. The accused took away the mobiles of security guard and some persons along with them.

As per the details four persons with weapons entered inside Mannapuram gold office at Ajwa road with an intention for robbery. They threaten everyone with the Tamancha like weapon after pushed the security guard and tired to go ahead with their attempt.

However the timely siren inside the office make them fled from the spot but they took away the mobile phones of security guards and some of the customers along with them.

Police reached the spot after the information and start their investigation into the failed robbery inside the gold loan office. Earlier also the same office saw incident of robbery worth lakhs few years ago.

“It was a attempt robbery and the four accused fled from the spot after the siren blown inside the gold loan office. They took away mobiles with them and we are trying to identify the accused and further investigating in the case” said Saroj Kumari DCP Zone 4.

The incident however shocked the area as this time of the day it is crowded with people as the complex has a two wheeler showroom beneath and hospitals nearby. The nearby complex also has business establishments and hostel which is buzzing around all the day.

9 May – Know your today’s horoscope