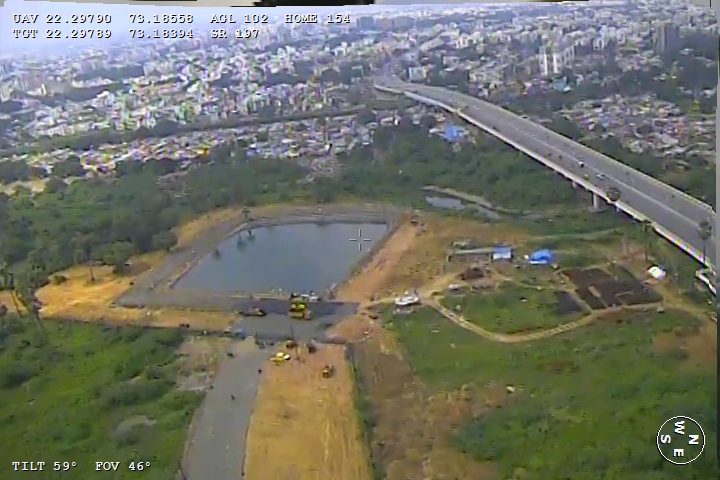 This year as historical Sursagar is under beautification Vadodara Municipal corporation prepare artificial pond inside Navlakhi ground for immersion of Ganesha idols. Other three such ponds in three different areas along with other ponds will be used by the mandals for immersion this time during Ganeshotsav.

Vadodara is celebrating the festival from 13 to 23 September with 1930 Ganesha idols registered with the police department. Apart from that the idols installed inside the houses privately and others takes the number to nearly 5000 this year.

Total 27 natural ponds situated at different places in the city will also be used by the administration for the immersion process apart from the artificial ponds this year.

On Sunday the Vadodara police department use drones to survey the area of Navlakhi artificial pond and taking the trial. They shared some pictures which present the beautiful view of the area from the top. As the immersion is approaching shortly the police department is taking no half measures to ensure the security during the process by using high tech security equipments.

Talking about other arrangements RAF and SRP battalions will area dominate in sensitive and hypersensitive areas of the city along with the supercop bikes patrolling inside the lanes. Police keep watch with the help of ‘Netra’ drone from the terrace. Three layer security at sensitive areas which includes foot, motorcycle and horse patrolling along with terrace points.

Traffic diversions will be there with no parking zones during the immersion process. Total 43 cranes will be used for immersion installed at scheduled places around the artificial and natural ponds. Servicrs of bomb disposal squad and mounted police will be used in the process.

Vajra vehicles and watercan also be used by the police. 150 high quality cctv cameras will be installed in 70 different places which covers the lanes and other parts of the area. UAV and Netra will be used during the security arrangements for the visarjan and seven ambulances will also be kept there in case of emergency along with a team of doctors at the SSG to attend the emergency.