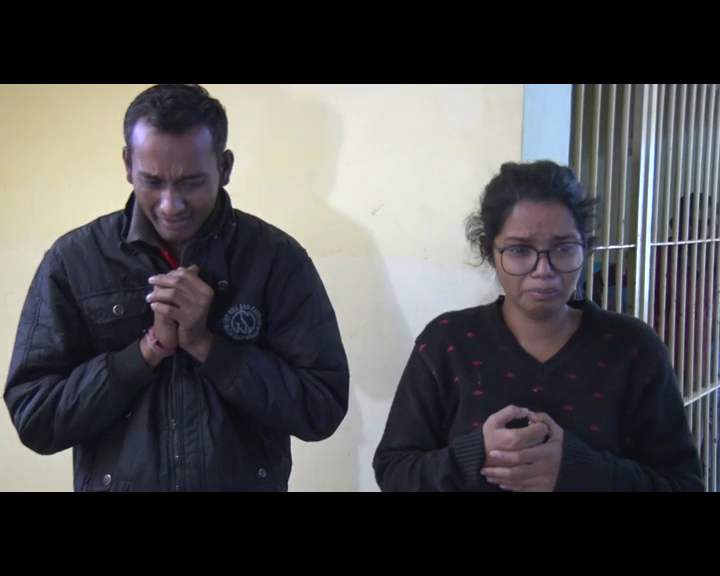 A former girl student of MSU Applied Chemistry was caught by police for ran away with 1lakh 71,130 and 35 checks from a transport manager house in Vadodara. The girl pretend to be Income Tax officer and raid the house of the transport manager and ran away with the cash and the cheques. She accepted to commit the crime due to cash crunch and also took the help of her boyfriend.

According to the information the complainant Dinesh Rajput is residing in B-102 Amrut Vatika apartment on government godown road near Dashrath village with his family. He is working as a manager in Devdutt Transport company at Ranoli GIDC.

Originally from Delhi and a former student of Applied Chemistry in MSU Vadodara Suchi Mehtu was suffering from cash crunch and he talked to her boyfriend Devashi Gosai about how to overcome from it. Her boyfriend also told her that he had no money with him but they hatched a plan to get money. The co accused boyfriend told her that as 500 and 1000 notes were stopped by the government the IT department is searching for the black money and they can get benefit from it. He further said that they can plot as IT officials and raid the house of the manager of the transport company where he was working earlier and they can take out money from there.

The plan was liked by Suchi and she showed her readiness for to give it a go. After the positive response from the girl Devarshi done a reiki of manager house before the crime. On 29th November Suchi Mehtu went to the manager Dinesh Rajput house at 9pm and pretend as IT officer and showed her I card to the manager who was frightened.

The manager and his family was in fear to see a IT officer at their house at this time. Took advantage of the situation Suchi asked the manager for the bag which he brought and she investigate and found 1,71,130 cash inside. She asked him some questions about the cash and seized it. She later took 35 cheques of Sunrise Polifilms Pvt. Ltd and one cheque of Indusind Bank of Nizampura branch and left the house.

After the incident the manager Dinesh Rajput give a complaint to Chhani Police Station about the incident on 20th November the next day and the Police Inspector A.A. Saiyed started investigating into the matter. During investigation the police access the details from the transport manager and came to know about a youth left the job recently. The police traced down the youth and later arrested the former student of the MSU for robbed the transport manager pretending to be a IT officer. During investigation the girl said that due to cash crunch she committed the crime.