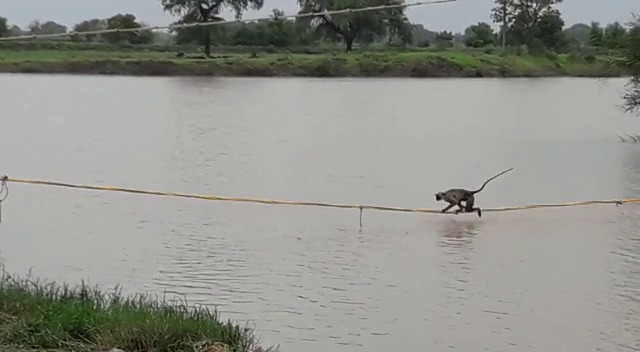 It’s a live rescue by the forest department of monkeys at Shinor after they stuck atop the Peepal tree. The monkeys in order to save them from rising waters climbed the tree and stuck there for four days and unable to move due to water inside.

The monkeys climbed the Peepal tree situated in middle of the lake at Vaniyad village at Shinor after the rain waters rushing inside at once. The monkeys were stuck there for nearly four days and later the villagers informed the forest department after they came to know about the situation.

The forest department tried to rescue the monkeys stuck on the tree and tried various ways to save them. Later they tied a rope from tree to a pole on the bank and make way for them. The monkeys take hold of the rope and walked to safety one after another. While they were passing the rope the brilliance of monkeys to balance themselves make the villagers appreciate their mind and coordination.