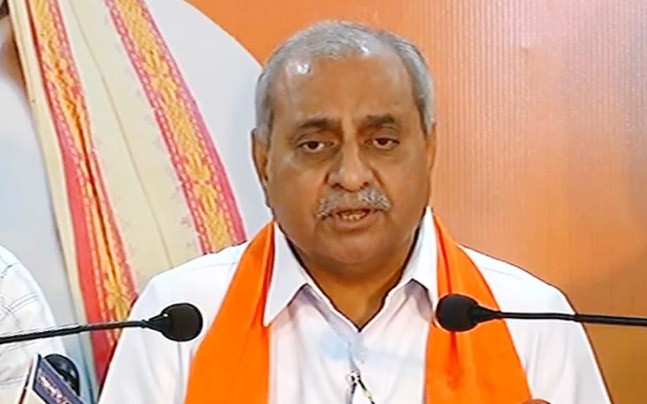 Gujarat Deputy Chief Minister Nitin Patel lashed out at Patidar leader Hardik Patel for accepting the Congress formula on job quotas and supporting it in upcoming Assembly elections, calling him a “fool”.

“Fools have given a formula and fools have accepted it,” a fuming Nitin Patel said. “I have not seen a more foolish person than Hardik. He is young boy. He may have got some love from the community but they are going to perish soon.”

Launching a vicious attack against the young Patel leader for almost 10 minutes, the Deputy Chief Minister appeared uncontrollable and unstoppable.

“They are like black stars who will extinguish. Many leaders like you (Hardik) have come and gone into oblivion. This is all temporary.

“In the past such leaders emerged during Nav Nirman agitation and other agitations. Now even their neighbours do not know about them. You will all vanish.

“The community will take revenge… They will hunt you and take revenge. Your name will be written in black letters in the history of the community and you won’t be able to show your face,” Nitin Patel thundered.

He also came down heavily on Hardik Patek for using Sardar Patel’s and Bhagat Singh’s names during the Patel agitation.

He alleged that Hardik Patel was responsible for the infighting within the Patel community.

“The Patel community was strong and united. All because of you, now the Patels are fighting within. You have worked to destroy its reputation. Politics is fine, government is fine but you have put our community to shame.

“Elections will be over on December 18 but the seeds of poison you have sown, the community will have to reap its harvest for long,” the Deputy Chief Minister said.

Nitin Patel, who is a candidate from the Patel stronghold Mehsana, appeared so worked up that he asked Hardik Patel to go back to his hometown and ask elders how “Nitinbhai” had helped people there.

“We have been appealing to you despite you insulting us, despite you breaking our offices. Do not think that we cannot retort. Just because we are in power, we have to maintain dignity. In 55-60 years of my political career, I have seen many like you,” he added.