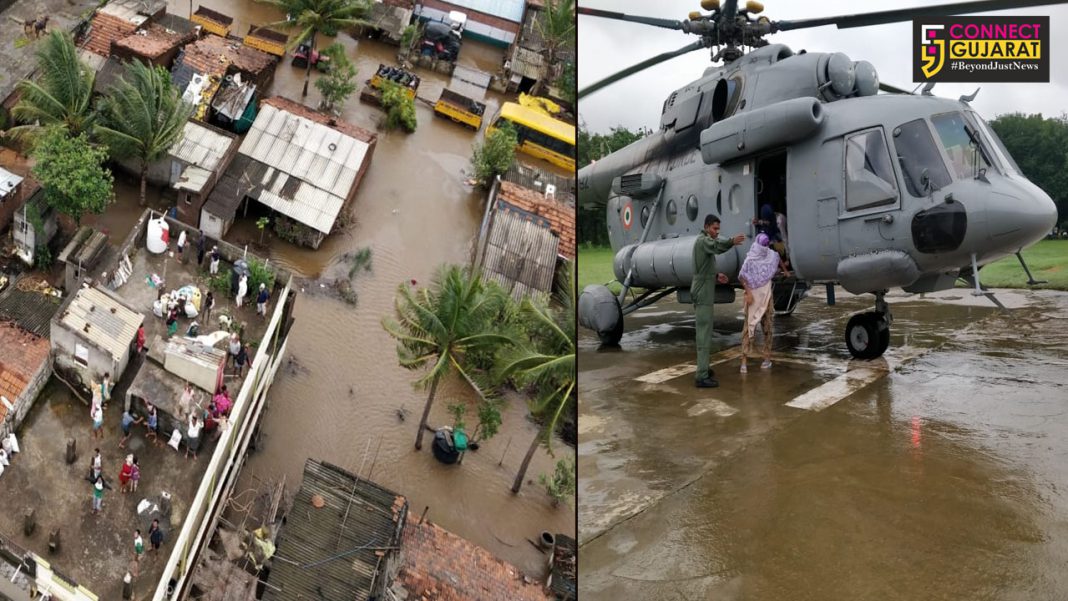 Aircraft assets of South Western Air Command are being extensively employed for rescuing marooned people from various districts of Gujarat and Maharashtra and alsoas positioning life saving relief materials and rescue teams in the affected areas. Medium lift helicopters and transport aircraft have been pressed into service and are operating from various Air Force and civil airfields for the same.

The operation began on 04 Aug when based on request from Government of Gujarat where two helicopters were employed to rescue 45 men, women and children from flooded area of Navasari and brought to Surat.

From 06 Aug, relief and rescue missions in Maharashtra commenced in full swing, especially at Kolhapur. Fixed and rotary wing assets were deployed despite poor weather conditions to reach people in need. The relief materials positioned at Pune by the State administration were flown into Kolhapur using these aircraft.

Kolhapur being an airfield with limited recovery aids gives the pilots utilized their superior flying and professional skills to ensure that the relief materials were flown in at the earliest. The helicopters were pressed into action to ensure about dropping the relief materials and also to evacuate the stranded citizens from their marooned houses and hutments. Despite the prevailing bad weather, the helicopter crew flew rescue missions relentlessly.

Rescue missions were also undertaken in Jodia and Pittar near Jamnagar in Gujarat wherein two Mi 17 helicopters were pressed into action to rescue 29 marooned people.
SWAC Headquarter closely monitoring the flood situation in the region and has deployed adequate air assets at Mumbai, Pune, Baroda and Jamnagar with other air bases in the Command standing by to provide assistance.