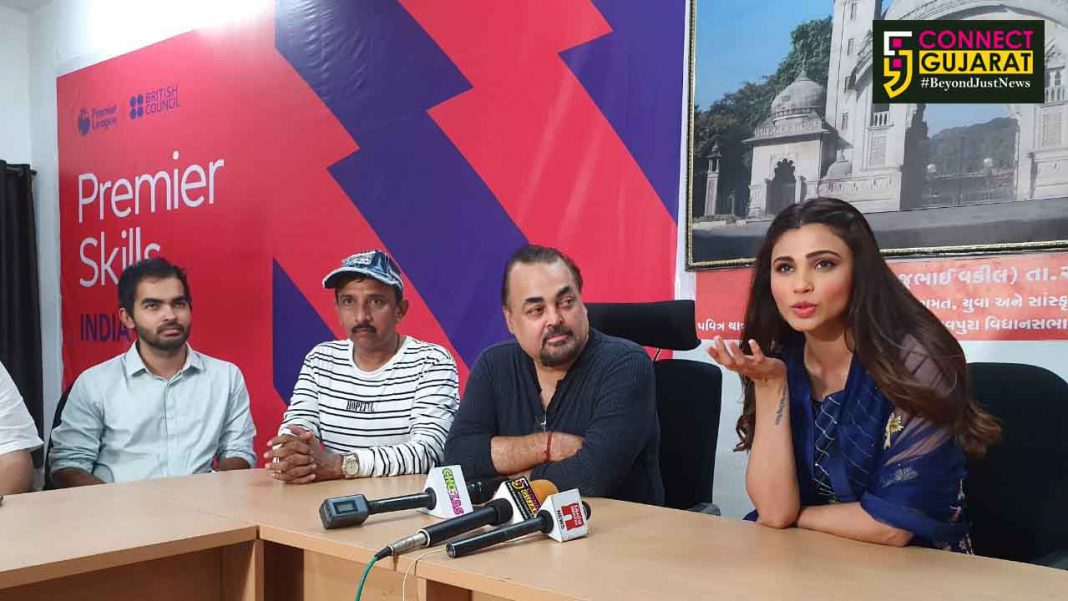 In a sincere effort to bring the Juvenile criminals to mainstream a first of its kind movie is going to hit the theatres later in the year. This upcoming Gujarati film ‘Gujarat 11’ is considered as the most expensive film in Gujarati industry and is the first sports drama. The film stars  renowned bollywood Actress Daisy Shah, Pratik Gandhi and Kavin Dave.

J J Creations productions, H G Pictures, Prolife Entertainment and Production Pvt. Ltd. in association with Y T Entertainment Ltd present the movie written and directed by Jayant Gilatar. He is known for directing films like Natsamrat, Meri Pyaari Bahania Banegi Dulhania, Krishnaji Ek Yodha and Chalk N Duster and once again choose a hard hitting subject for the film. He went through lots of research and technical details before writing the final script and bring it on screen.

Jayant Gilatar one of the popular Director in Bollywood is coming up with one such sensitive subject which can be a path bearer for the government and associated agencies. The celebrated director is currently directing the film ‘Gujarat 11’ starring Gujarati superstar Prateek Gandhi and Bollywood actress Daisy Shah. Produced by Haresh Patel, Maninder Singh Jolly and Jayant G., the film is based on the subject of Juvenile criminals where the director is trying to channelise their energies towards a positive and bright future.

“The film is the first sports film in Gujarati language with Gujarati superstar Prateek Gandhi and Bollywood actress Daisy Shah in main lead. The film also happens to be Shah’s first Gujarati film. The film also see music director Roop Kumar Rathod acting in his first ever film. The film is all about the formation of Juvenile football team in Gujarat and how they beat all the teams to reach the finals. Daisy plays a International football player and trained the juveniles to become footballers,” said Gilatar.

The film happens to be one of the expensive film in Gujarati cinema. “After the sucess of Ratanpur we effort to make a film about football and it is the first ever movie in Gujarati based on sports. The film also happens to be the expensive one in the Gujarati industry and most importantly the emphasis is more on the game. The final shooting will be in Bahrain,” said M.S. Jolly one of the producer of the film.

The film happens to be the first film of Daisy Shah and she said the overall experience was good. “Before the film I don’t know the F of the game but after trained for hours I finally able to know the game. The experience was good as being my first Gujarati film I enjoy my territory and connected with people. I get chance to transform myself as an actor and learn,” said Daisy Shah.

Talking about the aim to choose such a subject, Jayant said it’s about channelise their energies towards a positive and bright future. “Juvenile criminals are always on receiving end as the society never accepts them after they completed their punishment. I want to show the government and associated agencies a way to rehabilitate such juveniles and channelise their energy towards a better future like sports,” added Gilatar.

The film is wrapping up soon after the shooting in cities of Surat, Ahmedabad and Vadodara. Jayant Gilatar is planning to release the film in the month of October and also invite dignitaries to the premiere.

“The film based on a hard hitting subject which needs to addressed in a positive manner. I wants to show a positive way for their rehabilitation and hence plans to invite Prime Minister Narendra Modi and Gujarat Chief Minister Vijay Rupani for the premiere of the film. The film will definitely shows one of the best way to guide the Juvenile criminals to more positive way,” said Gilatar.

Jayant Gilatar thanked Sports Authority of India, Swarnim Gujarat University, AMC, SMC, VMC and Gujarat Tourism for their support during the shooting of the film. The film is first sports movie in Gujarati and Jayant plans to translate it in Hindi and English later on after the release and response from the film.

After this he is working on a thriller based on the novel written by renowned Gujarati writer Aashu Patel. Later he plans to direct a movie on cross border and thanked the government about their decision to remove Article 370 from Jammu and Kashmir. He said it gives the directors like him to explore the locations and freedom to shoot in the beautiful valley.