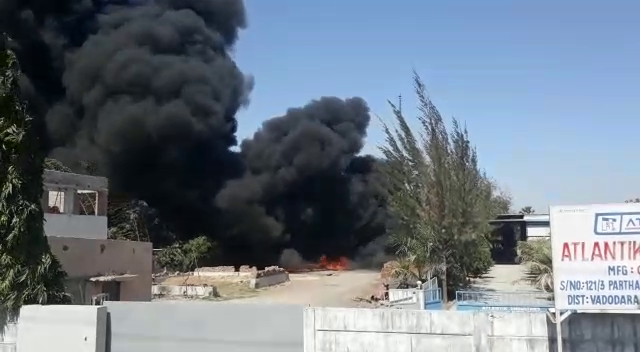 No casualties reported, loss in lakhs.

A petroleum production company caught fire in Savli early morning on Thursday. Situated near Prathampura village the fire started instantly and spread very quickly creating a sense of urgency inside. Nearby villagers rushed to the spot after thick black smoke spread in the area.

As per details a sudden fire spreads inside Atlantic Industries situated near Prathampura village in Savli early morning on Thursday  creating a panic like situation. The employees ran out for safety after the incident and fired brigade was called immediately. Till the team reach the spot the fire spreads to the petroleum products stored inside and turned big.

Fire fighters from Savli municipality,  Manjusar GIDC tried to control the fire spreads inside the company. Curious local residents from nearby villages rushed to the spot after saw thick smoke spread in the area. No casualties are reported in the fire but the loss is estimated in lakhs.