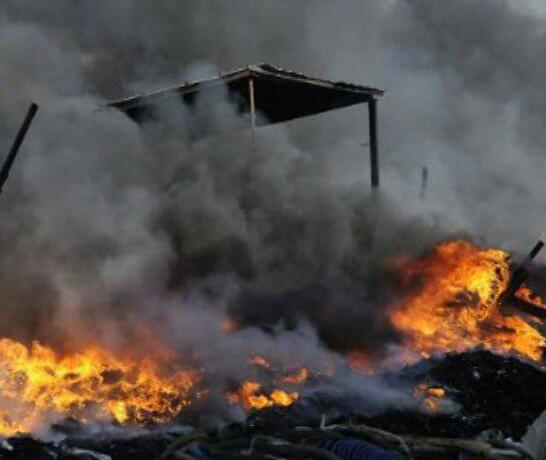 On Wednesday morning a plastic godown went on fire near Kundhela village in Dabhoi. The Vadodara fire brigade reached the spot after the call and started to douse the flames. After five hours of continuous water spray the fire is yet to come fully under control. The fire brigade has to bring water from the bore two kilometers away from the godown as there was no water available there. The same godown was also went on fire in the last monsoon season and then it took three days to control the fire.

As per the information Salim Bhai resident of Vadodara has a plastic scrap godown near Kundhela village. On Wednesday morning around 6am fire started inside the plastic godown. First the Dabhoi Nagarapalika fire brigade reached the spot to douse the flame but it was not controlled. Panigate fire brigade fire officer Bhargav Vyas said that the godown was filled with plastic, rubbers and other scraps and early morning it caught fire. The Dabhoi Nagarapalika fire brigade reached the spot and trying to doused the fire but they were not succeeded to control the fire.

Later Vadodara fire brigade was called and 15 jawans along with three fire tenders reached the spot. With no water supply near the godown the fire brigade jawans carried water fromna bore two kilometers away from the godown. One tanker was also sent to Vadodara for filling the water for continuous spray of water.

Last monsoon the same godown caught fire and it took three days for the fire brigade to control the fire. The team also has problems to reach to the godown due to only one road from the village.