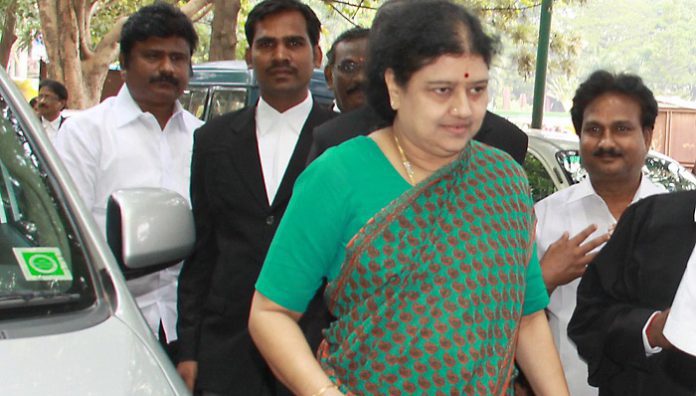 AIADMK General Secretary V.K. Sasikala on Wednesday vowed to return to politics as she left by road to Bengaluru to surrender even as an MLA accused her of abducting him.

As supporters flashed the “V” sign, the beleaguered Sasikala looked pensive as she was driven in a motorcade after a quick visit to the Marina Beach memorial of her mentor, the late J. Jayalalithaa.

Hitting the floor thrice with her right hand, Sasikala took a pledge that she would come back after defeating the “betrayers” in the AIADMK.

It was an apparent reference to acting Chief Minister O. Panneerselvam, who claims the support of some 40 of the 135 AIADMK MLAs and alleges that most legislators housed in a resort near here were being forcibly held.

Sasikala supporters claim the support of a majority of AIADMK legislators and insist that all of them are at the resort on their free will.

Sasikala later went to AIADMK founder late M.G.Ramachandran’s house at Ramavaram here and paid her respects before his picture and also meditated for some time.

At both places, hundreds of Sasikala supporters gathered, most of them looking grim.

The Supreme Court earlier rejected her plea seeking more time to surrender, a day after it upheld her conviction for corruption, a prison term of 10 years and fine of Rs 10 crore.

Also convicted in the case were former Chief Minister Jayalalithaa, who died on December 5, and two Sasikala relatives. All of them lived with the late Jayalalithaa at her Poes Garden residence.

A bench headed by Justice Pinaki Chandra Ghose declined the plea by senior counsel K.T.S. Tulsi, who said Sasikala wanted some time to surrender due to personal reasons.

Sasikala then left for Bengaluru followed by scores of supporters in a dozen cars.

Before leaving Chennai, she appointed a nephew, T.T.V. Dinakaran, as the AIADMK Deputy General Secretary, triggering resentment among old-timers.

Meanwhile, hundreds of police personnel reached the resort where AIADMK MLAs backing Sasikala are housed after one legislator accused her of abduction.

S.S. Saravanan, an MLA from Madurai South, slapped the complaint against both Sasikala and E. Palanisamy, who was elected leader of the AIADMK legislature wing in her place after she got legally entangled.

Saravanan landed up at Panneerselvam’s residence here on Monday and told the media that he scaled a wall at the resort and jumped down to escape.

He said he had to disguise himself to get away from the resort where he alleged he was held against his wishes.

Many pro-Sasikala legislators told the media on Wednesday that they were not being held forcibly as alleged by the Panneerselvam camp.

But after Saravanan’s complaint, a large number of police personnel reached the resort.

One of the legislators, Thenarasu, told the media that the legislators would vacate the resort once the Tamil Nadu Governor invited their leader to form a government.

He said the legislators could also vacate the resort if Palanisamy told them to do so.

Thenarasu said the police made some enquiries and had left. But others at the site said they were still massed outside the complex.