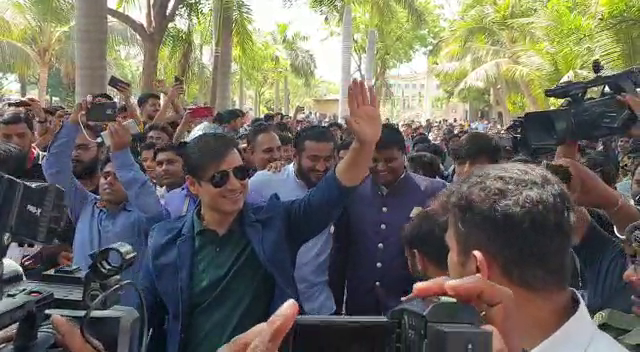 Said privilege to know him as a person during the shoot of the film.

Film star Vivek Oberoi reached Parul university for campaigning of his film ‘PM Narendra Modi’ a biopic on Prime Minister Narendra Modi. He said it’s a privilege to know him as a person during the shoot of the film. However he kept himself away from answering any political questions during the interaction.

Vivek Oberoi reached the campus much to to fanfare of the students who made beeline to greet the actor. They clicked pics and selfies with the actor and welcome him to the campus. During interrogation he said to be privileged to perform the role of a great personality on screen.

“The film is all about patriotism and inspire everyone about how a person without any backing, big surname, cast politics became Prime Minister purely on merit. Further more with his vision he becomes a world leader and talked with the top leaders eye to eye and matching shoulders with them,” said Oberoi.

About propaganda he said in last five years lots of PIL’s filed in the court along with allegations but all are without any proof. He learns a lot of things and said a second film can be produced just on the numbers of protests and allegations.

He said meeting Narendra Modi helps him in the performance. “I met him many time since he was the CM of Gujarat and later became Prime minister of India. Everytime I met him I observe his way of talking, style and views which helps me in the performance,” said Oberoi.

During the interaction with the students he said to be not interested in politics now and will think after 2024. If he comes to politics then will fight from Vadodara just because of the love and affection people gave to  Narendra Modi when he contest from here.

For the film he tried make up for continuous 15 days and finalise at the 16th day. He woke up 4 in the morning and went for shooting of the film.