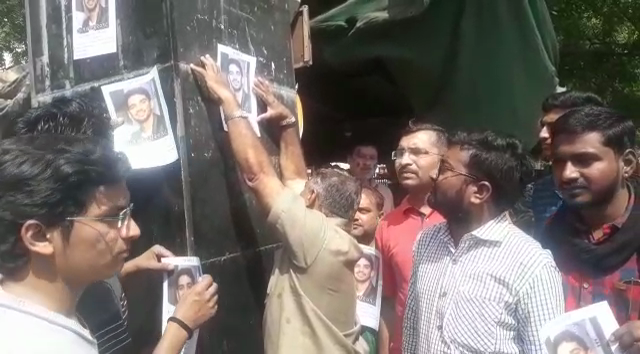 Father of Devkishen Ahir who went missing from Sunday stuck his posters at Vadodara railway station on Saturday as he is still untraceable. Devkishen went missing after writing a letter to his parents apologising him and put allegations on the college administration for intentionally failed him in exams.

Devshibhai Ahir along with students of the Gotri Medical College reached Vadodara railway station and paste posters of Devkishen in a effort to find him. For the last one week the student is untraceable and the family and friends are trying effortlessly to find him.

Devkishen Ahir an MBBS student from Gotri medical college went missing from Sunday left behind a note apologise his parents for taking the step. He put allegations on the college administration for intentionally failed him in the exams and that hurts him badly. According to his friends Devkishen went in depression and that might forced him to take such a step.

Earlier medical students of Vadodara took out a silent rally in support of Devkishen Ahir and request him to come back soon. They also give memorandum in this regard to collector and other officials to help them trace the student.