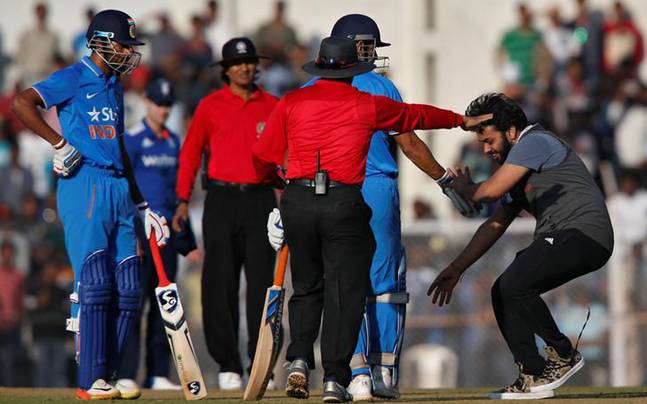 Mahendra Singh Dhoni’s popularity has diminished not a whit even after he quit the limited overs captaincy. A devoted fan on Tuesday breached security and ran into the Brabourne Stadium ground here to touch the iconic wicketkeeper-batsman’s feet during a warm-up match against England.

As Dhoni officiated in his farewell warm-up match as skipper of India A, a man jumped the 10-feet fencing and, dodging the North Stand security, touched the feet of ‘Captain Cool’ who calmly shook hands with the interloper before security personnel escorted him off the ground. The incident happened during India A’s innings when Dhoni and his partner Hardik Pandya were chatting in between overs.

India A posted 304-5 against England with Dhoni scoring 68 runs off 40 balls. He also scored 23 runs in the last over by slamming two sixes and two boundaries.