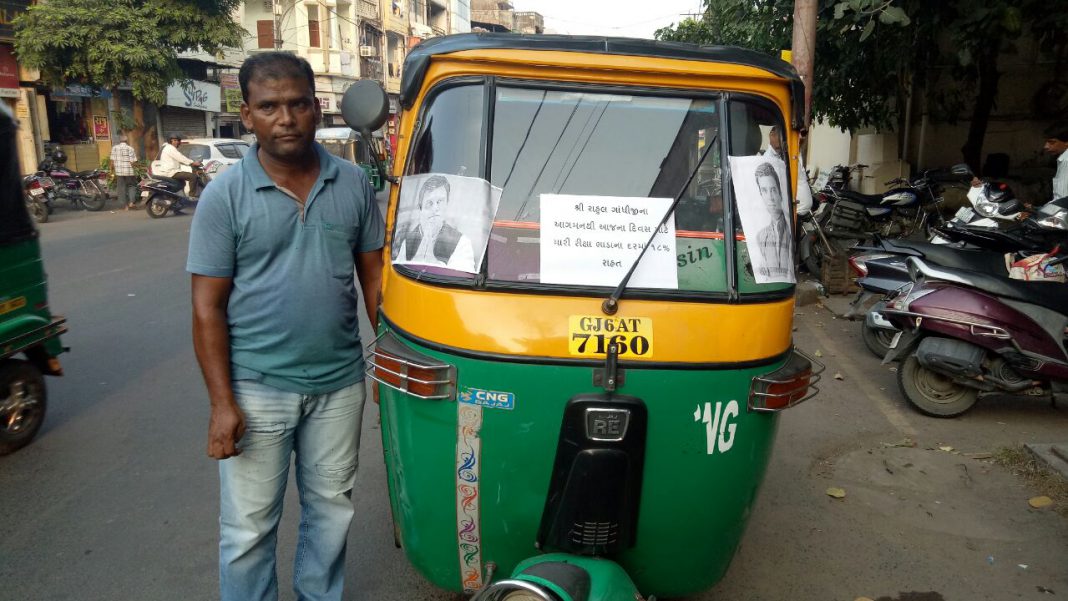 We often see people do unique things to meet their role model. They forget all the problems and other things just for their love and respect towards their icons. A auto rickshaw driver in Vadodara give 18% discount on the total bill due to the arrival of AICC V.P. Rahul Gandhi in Vadodara. Firoz Momin idolises Rahul Gandhi and see him as today’s youth icon. He also added that the scheme is not politically motivated and it is just he wants to meet his icon.

Momin stick the poster of Rahul Gandhi on his rickshaw along with another one which reads 18% discount on auto fare due to his arrival. Since morning he runs his rickshaw on the city roads much to the surprise of the passengers and people. He said the idea proved costly to him but it is his liking towards Rahul Gandhi which makes him to introduce the scheme.

“I like Rahul Gandhi and as soon as I heard he is coming to Baroda the idea strikes in my mind. I know it’s not possible to meet him but I decide to send him a message and hence start the scheme on his arrival day. I know the discount trip proves costly for me but it’s the matter of my icon and wants to send a message to him,” said Momin.

He further added that on the day he ferried 5 to 6 families and college students who all appreciated his gesture and paid full fare. But he continues the service till Rahu;l Gandhi is there in Vadodara. Momin has two children a son studying LLB and daughter is in 6th standard.