Connect Gujarat
#Beyond Just News
More
Home Gujarat Families of Diwakar Faltankar and Deepak Pawar are trying to get a... 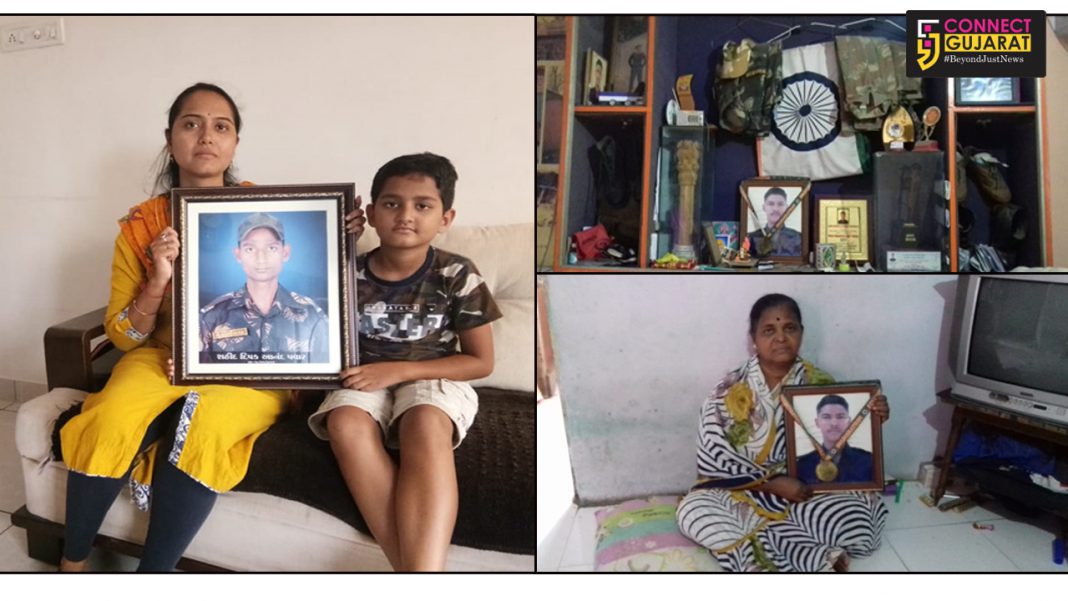 Request the government to listen to their pleas

As the country is observing 20th anniversary of Kargil Diwas here is a story from Vadodara where two families are still fighting for their rights after lost their member sacrificing their lives for the nation. Families of Diwakar Faltankar and Deepak Pawar are trying to get a job for their family member for the last 10 years in front of the government.

The city still mourn the martyr Arif Pathan fell to enemy bullets in Akhnoor. The whole Vadodara turned up for his last rights performed on Wednesday with full military honours. The city is proud of their martyr sons and when we are observing 20th anniversary of Kargil Diwas, two families in Vadodara are still struggling to have both ends meet.

Ramaben mother of martyr Diwakar Faltankar lives in one room kitchen at Salatwada area still remembers the day when her son sacrifice his life for the nation. Her son martyred six months to his marriage and left behind a sobbing family. She is proud of her son martyr for the nation but saddened by the central government actions. A member of the family gets the job is still not given to them after so many years. Her second son business is also shut and the whole family is dependent on the pension of her martyr son.
Her younger son get job in the corporation but he support his family. She request the government to provide job to her second son.

She further said to remember her son Diwakar after the news of Arif Pathan reached her. She remembered her son attained martyrdom and watched his lifeless body before her. She request the government to think about the families of the martyrs then every mother will send their children to protect the nation.

In another part of the city in Tarsali lives wife of martyr Vijay Pawar. Hetal Pawar still remember the date 19-01-2011 when her husband was martyred for the nation. She is still searching for the job of her liking.

“I am a graduate in Arts and get the job in IT department in Corporation under 11 months contract. After that she is fed up to run from pillar to post for the job in there and now working in a private school. I lived with my parents along with my eight year old son studies in Kendriya Vidyalaya. My son is also asked me to join the army like his father,” said Hetal.

With a heavy hear she remember her husband after the news of martyr Arif Pathan. She is proud of her husband sacrificed his life for the country but also tried to find a better job to support her family. She demand a job from the government.