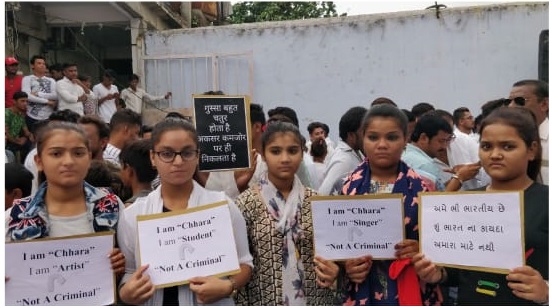 Bhasha Research and Publication Centre, Vadodara organise a public exhibition on the project focused on their work on Chhara DNT community based in Ahmedabad. The exhibition will be continue till 30th June and special guided tours are also organized for the people there. The exhibition will be held at Satya Gallery, Navajivan Trust campus, Ashram Road, Ahmedabad from June 25 to 30, 2019.

Bhasha Research and Publication Centre, Vadodara the only from India was one of the 6 final winners in a global competition in 2018 titled Communities Connecting Heritage, implemented by World Learning, Washington and supported by US Department of State. Bhasha paired with the Department of Anthropology, University of Northern Colorado, USA, to work on Reclaiming Heritage: The Intercultural Heritage Exchange Project from February to July 2019. 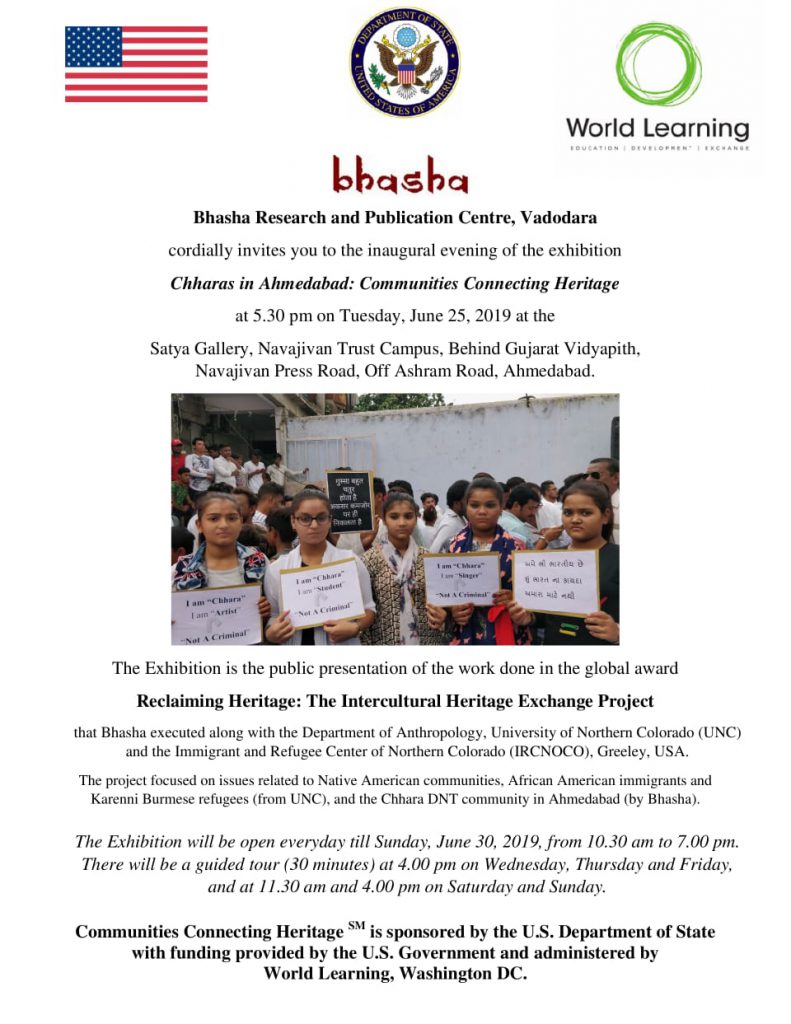 While Bhasha focused on their work with the Chhara DNT community based in Ahmedabad through the Budhan Theatre activities, the University of Northern Colorado (UNC) Department of Anthropology and Immigrant and Refugee Center of Northern Colorado (IRCNOCO) focused on issues related to Native Americans, the African American immigrants and Karenni Burmese refugee communities.

For many people with histories of social and economic marginalization and insecurity, recognition of their own cultural heritage and their right to preserve and manage is difficult to imagine. For example, refugees coming to the United States from war-torn countries have experiences and concerns that tend to overshadow heritage considerations.

Likewise, stigmatized, nomadic tribal groups living in India must prioritize survival over appreciation and preservation of their own cultural heritage. Heritage studies reveal that stewardship of cultural heritage by custodial individuals and groups has the potential to improve their social standing in their own eyes and those of the mainstream communities in which they live, thus increasing the likelihood of concomitant benefits to their security and wellbeing.

This is the premise upon which the project is founded and through this project partnership, the aim is to ignite passion for cultural heritage stewardship in the minds and hearts of historically marginalized custodial communities in both countries with the long-term goal of improving their prospects. Opportunities for rich, intercultural in-person and virtual exchanges will deliver both short- and long-term outcomes focused on custodial groups awareness of pride and desire to preserve their respective cultural heritage.

The program employed inexpensive Virtual Reality technologies to engage participants from historically marginalized cultural groups in the United States and India in an exploration of their respective cultural heritages. Through virtual exchanges using the Google+ platform, participants interacted with 360-degree images that include ambient sound captured by lead participants and viewed through Google Cardboard Goggles. In addition 5-member teams from Bhasha and the University of Northern Colorado also visited the focus communities of each country on a 2-week Intercultural in-person exchange.