Top
Home > India > 'Even if you burn Modi alive, Modi is not scared'

'Even if you burn Modi alive, Modi is not scared' 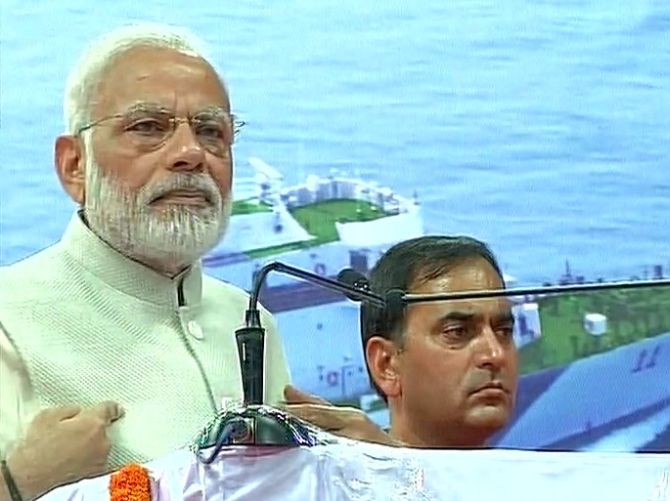 Barbs and criticism from the opposition do not scare me, Prime Minister Narendra Modi said on Sunday, claiming the success of his Jan Dhan Yojana was a testimony to his determination to pursue inclusive development.

"We started Jan Dhan accounts. When I came up with this scheme, I was mocked in Parliament... Even if you burn Modi alive, Modi does not get scared.

"Through the scheme we started bank accounts for the poorest of the poor. Now people will realise the importance of the bank accounts," Modi said.

He was speaking at the Shama Prasad Mukherjee indoor stadium in Bambolim village near Panaji where he digitally laid the foundation stone for a new greenfield airport at Mopa plateau and an electronic city in Tuem, both in north Goa's Pernem sub district.

"Rich people in India have bank debit and credit cards lined in their wallets. The poor do not know about such cards but under the Pradhan Mantri Jan Dhan Yojana over 20 crore people got a Rupay debit card years back.

"If a person has money in the bank account, he can buy anything from the market today," Modi said.

The Prime Minister also said that his efforts at bettering India's economy and attacking black money was not a political agenda, but a cure which he was administering in doses to improve India's economic health.

"This was not politics. I was slowly trying to administer medicine to cure India's economic health. I was slowly increasing the doses," he said.