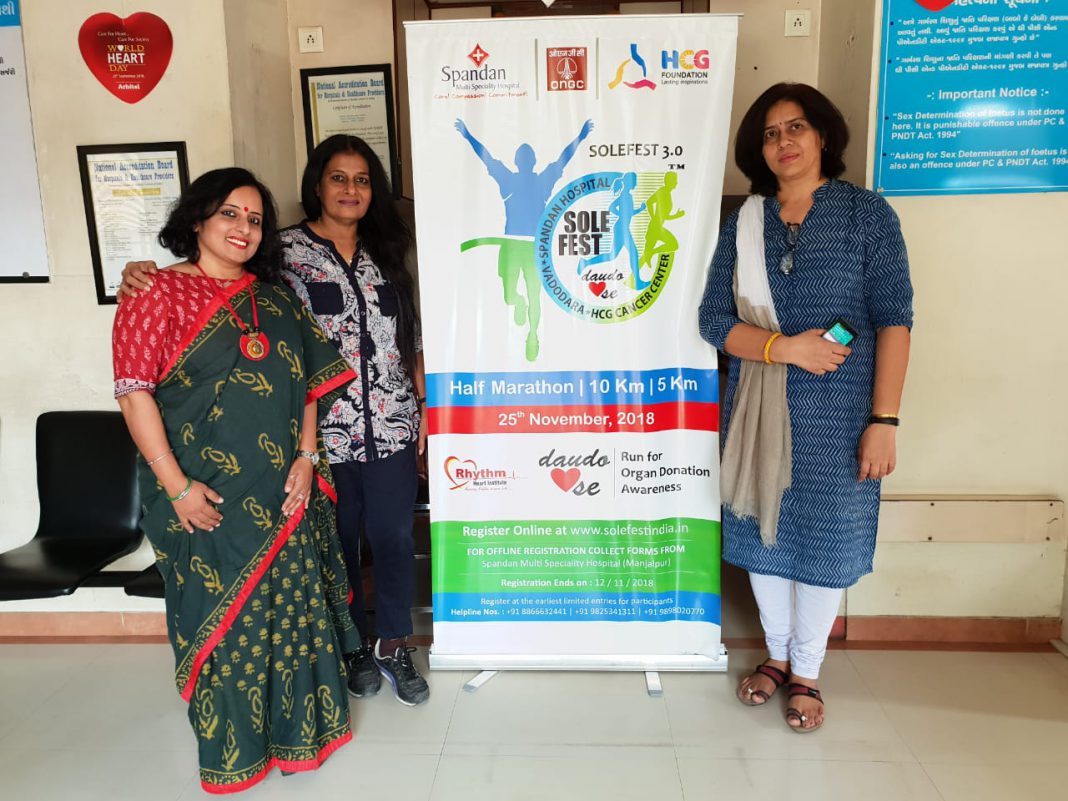 Spreading the message about women can run a half marathon in a saree.

SoleFest –Daudo Dil Se is once again ready to spread the awareness about organ donation in Vadodara. The long distance running event is one of the major attractions every year as it aims for a noble cause. This year a unique concept is attached with the run which will be the major attraction for the runners as well as for the supporters.

This year a group of beautiful and empowered women will run the mini marathon wearing Nauvari sarees. Eight women wearing traditional Maharashtrian saree will add the attraction in the event as they are running with a purpose.

Brain child of three women Anita Sharma, Mallika Shetty and Nikita Batra the unique concept to run in Nauvari saree is to spread awareness in the women working at home. “When it come to running people commonly draw a picture of athletes running in shorts and t shirts. However we want to spread the thing that it is a mental block everywhere and dress in nothing to do with the cause. Women specially working at home hesitate to come forward due to saree but we want to spread the message that a saree can also help in running a marathon,” said the trio Nikita Batra, Anita Sharma and Mallika Shetty.

Talking about the idea of including such unique concept in the run the ladies said it comes with the saree group running in Vadodara. Nikita Batra and Mallika Shetty are also the members of a saree group called Baroda Saree Pacters starts with an aim to promote the weavers and handlooms. Every month the group purchase a traditional saree from the market and wear it to support the weavers behind it.

“We all members wear sarees with ultimate proud and want to spread the message to every women to support the traditional hand woven sarees. This year we decide to try something new at SoleFest and ends up with a solution to wear Maharashtrian Nauvari sarees. The dhoti style saree gives us the comfort to run and also to spread the message that women can run in a saree,” said Nikita Batra. She also added that many of the women in the group backed after heard the concept and finally eight confirm their participation in the run.

Introduced for the first time the women are very excited to run and practiced wearing sarees inside their house. “All the runners are above 40 and purchase the same style a colour saree for the event. We all are wearing pink colour Nauvari with golden zari and help people understand the mental block inside their minds that women can run only in shorts. The concept is something new and we want to carry on it in future to create a group of saree runners and also design the saree available readily stitched for the purpose,” said Mallika Shetty.

The SoleFest- Daudo Dil Se is a  long distance running event organised by HCG Cancer Institute and Spandan Hospital, with an aim to create awareness about the noble aspect of Organ donation. The idea behind the event is to have a non-timed, comfort paced run for the running fraternity of Vadodara, and link it with a cause close to everyones heart – Organ Donation.

The event 3rd year in succession has two running categories – 10Kms and 5kms Half Marathon where the participants run for the cause and spreading the message of organ donation. The Nauvara saree runners will be the added attraction this year to celebrate women hood and spread the message specially to the housewives to chase their dreams.

Netflix names ‘Bridgerton’ as its ‘biggest series ever’