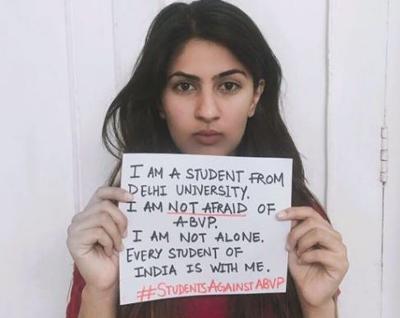 Threatened with rape and murder, Delhi University student Gurmehar Kaur on Tuesday announced she was withdrawing from the campaign against the RSS-affiliated student group.

“I’m withdrawing from the campaign. Congratulations everyone. I request to be left alone. I said what I had to say,” Kaur tweeted.

“I have been through a lot and this is all my 20 year self could take,” said the student of Delhi’s Lady Shri Ram College and daughter of an army officer who died in the Kargil war.

Kaur, however, asked students to join a planned protest march on Tuesday at the Delhi University campus.

“The campaign is about students and not about me. Please go to the march in huge numbers. Best of luck.

“To anyone questioning my courage and bravery.. I’ve shown more than enough,” she said.

Kaur launched a social media campaign against the Akhil Bharatiya Vidyarthi Parishad (ABVP) after it forced the cancellation of a seminar at Ramjas College.

It was then accused of attacking students, lecturers and journalists in the campus.

Kaur posted a video on Facebook with placards, one of which read: “I am a student of Delhi University. I am not afraid of ABVP. I am not alone. Every student of India is with me.”

She then received rape and death threats on the social media. Some of those who trolled her called her “anti-national”.