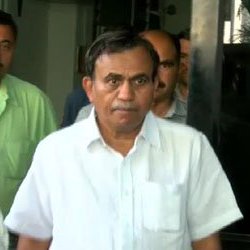 Dr. Mansukh Shah the person who used to sleep on velvet mattress in Air-conditioned room slept on a simple cot mat inside Raopura police station Tuesday night. In the morning he had tea from a road side tea stall and started his day. The person who don’t even less the donation money taking from the students gave 50 rupees tip to the person who lives on footpath and give tea to him.

Living in the Panigate area of the city in a luxurious bungalow at Udyog nagar, Dr. Mansukh Shah was caught by the ACB for accepting a bribe of 20 lakhs from a student to allow her to sit in final of her MBBS exam. He was brought to the Raopura police station on Tuesday night along with the two others and spent their night inside the custody.

Dr. Mansukh Shah who used to live luxurious life spent the night with his two other associated inside the lock up. Ashok Tailor and Vinod Sawant slept but Dr. Mansukh Shah spent the whole night sitting on the simple cot and dozing off.

According to the sources late in the night Dr. Mansukh Shah complained of back pain and a well wisher gave him a pillow and he spent the whole night with the help of that pillow. At 5am the person living in the footpath near the police station brought tea from a tea stall near the GPO and gave it to Dr. Mansukh Shah and the others.

Dr. Shah who never less the amount in collecting donations from the students gave 50rupees tip to the person. The person living on the footpath said that till date he gave tea to many accused inside the police station and they gave money to him as they like.

Dr. Mansukh Shah, Ashok Tailor and Vinod Sawant was taken to the ACB office in the morning from Raopura and will be produced before the court in the afternoon.