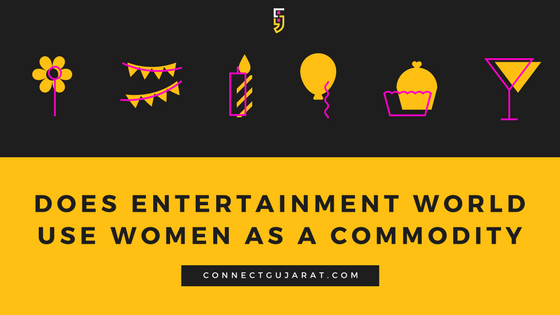 In the recent years, the topic of women being objectified has been at par and is considered as a big insult to the integrity of the entertainment business.

The entertainment world is a controversial subject. It has more scandals to it than the Ancient legends of our world.  To see it in the way of trend it has actually garnered a lot of attention from how it was looked at in the past. Nothing exact can be said about the fact whether women being treated as a commodity is entirely true or not. Because a lot had changed from the past mishaps when women were just an accessory to the hero, a prop used to keep the viewers hooked to the television.

Listed below are few aspects that will give you a clear picture,and you will be able to decide yourself if women are merely a commodity or not.

The reason, why advertisement is being mentioned, is the fact that women are usually scantily clad when seen on a poster, be it for a perfume brand or a watch brand. Women are styled in a way which they call beautiful,but all that can be noticed is the lady with her male partner in a position that is not exactly elegant but sexually attractive but with clothes on.

A person hardly gets to see a plus size, beautiful woman, wearing a gown and walking the talk or dancing to tunes. It is a perceived notion that she might take too much space and is usually replaced by someone less ‘plus-sized.’ Sadly the woman is objectified and is helmed to step into the shoes of the sidekick and will crack jokes at her.

And you thought the funny comedian following the hero (the protagonist) everywhere doing his stints and being praised for it? Unfortunately, the romantic interest in the movie is the sidekick. She is the glamour quotient of the movie, underpaid, sexually objectified and of course stripped for higher TRP’s. Because who likes watching a bunch of men doing their shenanigans!

This is the sad truth behind the glitz of the entertainment world where women are objectified more than they are celebrated. Thankfully these days there are women-centric films, advertisements, campaigns that manage to somehow make their existence felt but not to the extent of how men are celebrated. By now you sure can tell whether women are a commodity or not.