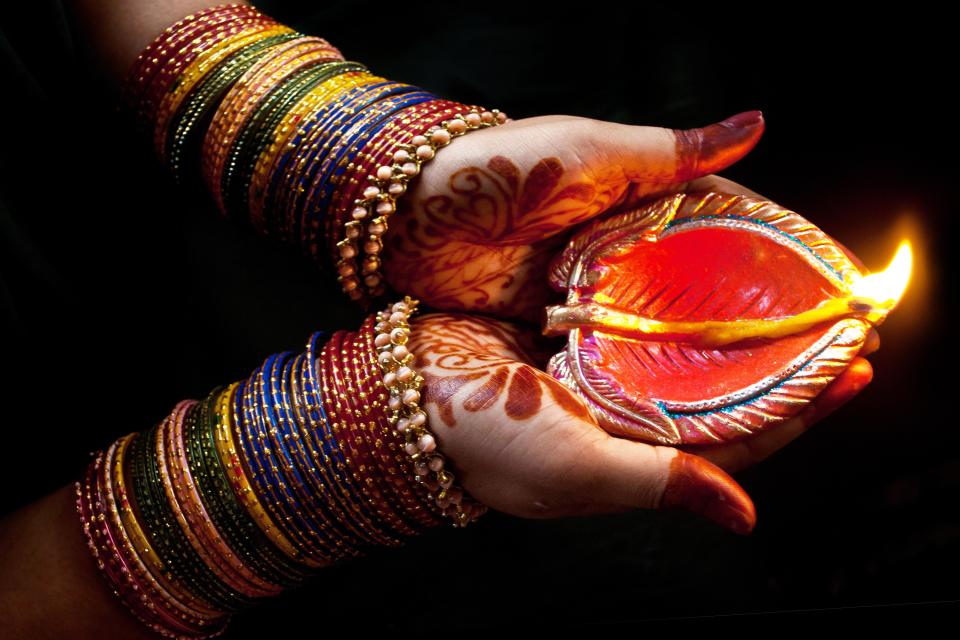 Diwali or Deepavali the festival of lights is celebrated every year in the month of Autumn. The festival signifies the victory of Good over evil, light over darkness and is the most eagerly awaiting festival in India.

People celebrate the festival by illuminating their houses with colourful lights and traditional earthen lamps (Diyas) for the five days or more. The festival preparations extends to five day period but the main festival night falls on darkest, new moon night in the month of Kartika between mid October and November.

Beautiful Rangolis outside at the entrance and inside marks the colourful mood and also to welcome Godess Laxmi to bring prosperity and happiness in the family. Fireworks are the important part of the festival after the puja and who can forget the sweet delicacies to feast on.

The festival begins from Dhanteras two days before Diwali and ends on Bhaidooj two days after. People clean, renovate, and decorate their homes and offices before the festival starts. On Diwali they wear new clothes, light diyas, worship godess Laxmi followed by fireworks. Exchanging sweets and gifts is also a important ritual in this festival. It also marks a major shopping period in the whole year.

In ancient India Diwali considered as festival after the summer harvest in the hindu month of Kartika. The diyas mentioned in Skanda Purana symbolically represent parts of sun gives us light and energy to all life. Some regions Hindus associate Diwali as the legend of Yama and Nachiketa on Kartik Amavasya.

Diwali is celebrated by everyone marks different historical stories and events. But all symbolise the victory of light over darkness, good over evil, knowledge over ignorance. The stories told on Diwali vary regionally but all point towards joy and celebration with lights.

Hindus across the world celebrate Diwali in honor of return of Lord Rama, wife Sita, brother Lakshman and Lord Hanuman to Ayodhya after defeated Ravana. As Lord Ram came back from 14 years exile the villagers light Diyas to celebrate the victory of good over evil. For some Diwali celebrates the return of Pandavas from 12 years of Vanvaas and one year of Agyatvaas.

Diwali is also linked with Lakshmi goddess of wealth and prosperity. The five day festival begins when Goddess Lakshmi was born and the night of Diwali when she chose Vishnu as her husband. Devotees also make offerings to Lord Ganesha, Saraswati and Kubera.

In eastern region of India such as West Bengal and Odisha people worship Goddess Kali and call it Kali Puja. In north central region people recognizes god Krishna and celebrate the legends of him along with Mount Govardhan. In other regions feast of Govardhan Puja or Annakoot is celebrated and offered to Krishna. In West and some Northern parts of India the festival Diwali marks the start of new Hindu year.

Similarly in Sikhism, Jainism and Buddhism people celebrate the festival of Diwali according to their traditions based on the historical significance.