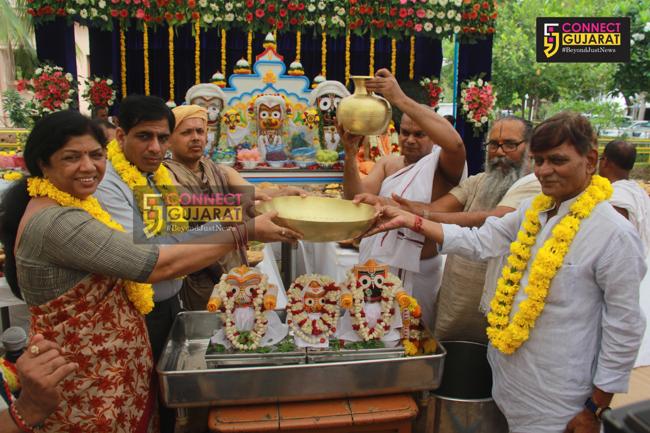 Today is a very auspicious day Devasnana Purnima marks the beginning of the rituals which culminates in Rath Yatra. Today marks the commencement of the rituals at Puri. Similarly various temples all across the world observed the festival on this day as per the rituals continues from decades.

Iskon temple Vadodara also celebrate the festival inside the temple premises and bathed God Jagannath, Balbhadra and their sister Subhadra. As per the rituals the Lord gets ill after saw the Bhakti of Raja Indradyumna and every year the Jagannath Puri temple close for 17 days. Ayurvedic medicine is offered to the lord and everyone pray for their well being and then the doors of the temple will be open on the Rath Yatra day. On this day the 1008 types of Prasad was offered to the lord in the Iskon temple.

Devasnana Purnima is an inseparable part of the famous Rath Yatra Puri. The day is believed to be the birthday of the Lord Jagannatha. This day, the full-moon day of the month of Jyestha, the deities are bathed by 108 pitchers of water of the well situated near the Sitala temple in the confines of the Jagannatha temple. Having been bathed, the deities are dressed up in the Gajanana or Ganesha Vesha. Then, their daily food offering or Bhogalagi is made on the Snanamandapa, in a full public view, without remaining any virtual difference between the devotees and the Lord Jagannath, popularly known as Lord Krishna. These traditions are followed before the legendary Ratha Yatra celebrated here.

The rituals performed in the festival are maintained in the 'Niladri Mohadaya', a religious text written in Oriya language. Devasnana Purnima or Snana Yatra, exclusively being the festival of Lord Jagannath, is believed to be one of the oldest festivals. As per the Skanda Purana, Raja Indradyumna set this bathing ceremony when he installed the wooden deities here. Apart from Puri, the festival is simultaneously celebrated in all other major shrines in Orissa. Due to its own importance and elaboration in Puri, thousands of national and international visitors come here to be a part of this grand celebration.

Jagannath Puri temple is the foremost epicenter for the festival of the Rath Yatra in Puri. This festival is celebrated every year on the 2nd day of Shukla Paksha (waxing cycle of moon) in the month of Asadh, the 3rd month according to the lunar calendar of India. Puri Yatra has always been popular among tourists due to its religious connotation. Every year, they visit Puri and take part in the celebrations with full of enthusiasm.

The Rath Yatra or Chariot festival, one of the much-awaited Hindu festivals, honors the Lord Jagannath’s visit along with his siblings – lord Balbhadra and deity Shubhadra – to the temple of Queen Gundicha. As many as three new splendid chariots are created for the elegant Rath Yatra Puri (the journey) of the Gods – Lord Jagannath and his siblings – every year.

On the graceful day of Puri Yatra, when these 45-feet high idols are pulled by millions of devotees came here from all over the world. During the Rath Yatra Puri, the caravan of Lord Jagannath, on the way, stops at their maternal aunt’s place – Mausima temple – to take the meal of sweet pan cakes, Jagannath’s favorite dish as said. The bejeweled chariots come back to the temple in the same way. During his journey, Lord Jagannath is accompanied also by the celestial wheel called Sudarshan Chakra.