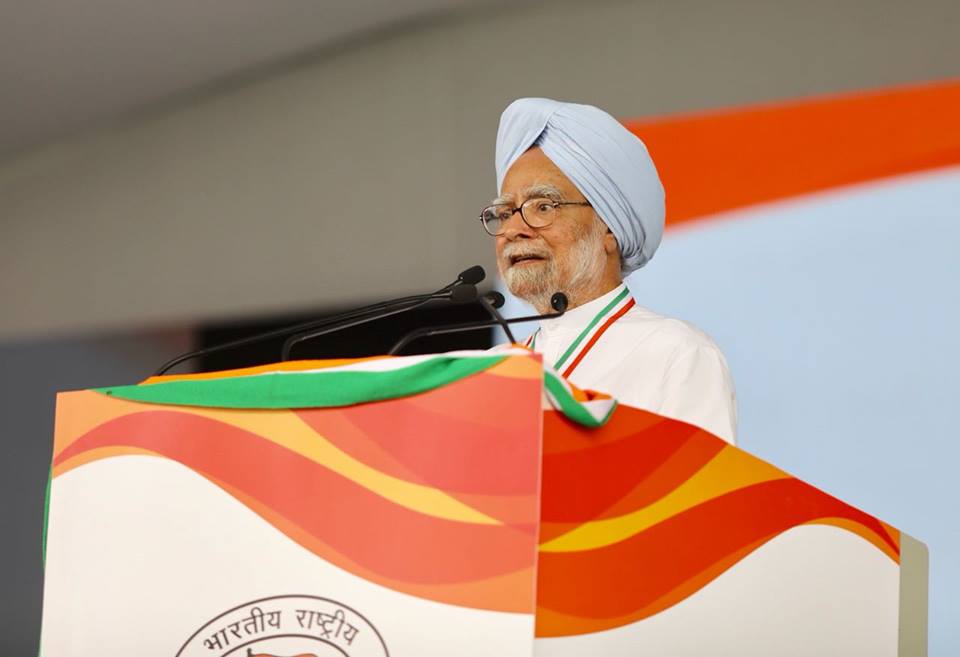 Former Prime Minister Manmohan Singh on Sunday revived his attack on the ruling dispensation, saying the democracy of the country is in danger with the Modi government consistently undermining its constitutional institutions. “The manner in which the Modi government is functioning, it can also pose a threat to democracy in the country. In the last few days, what happened in Indian Parliament is before the people of the country (to see),” Singh said while addressing the ‘Jan Akrosh Rally’ at Ramlila Maidan.

Singh stated that the Modi-led central government has failed to fulfil all its promises it made before coming to power and added that it is the time it should present a report card of its works to the people of the country. The former PM also claimed the anger among all sections of the society has shot up in the last four years due to the rising threat to the safety and security of the people and the vanishing employment opportunities, which has left the youths worried.

The Modi government, he said, seems hardly perturbed despite rising attacks against the minorities, the Dalits and the women. He also accused the Modi government of thwarting the Opposition’s ‘No Confidence Motion’ in Parliament and said it did everything possible and conspired to stop it from being taken up in Parliament.

“It is clear from this that if the Parliament does not function, it can pose danger to the democracy in the country. Democracy is a gift of the India’s Constitution and we should all strive to strengthen it,” he said. “Today such an atmosphere is being created where the Constitutional institutions are being insulted. I talked about the manner in which Parliament was not allowed to function and how the Budget was passed.”

“The way the ‘no confidence motion’ by the opposition was not allowed to be taken up…, all this is posing a danger to India’s democracy,” he said.

Singh also painted a grim picture of the country’s bank in the wake of Rs 13,000-crore Punjab National Bank fraud. He said what has happened in the banking sector with Nirav Modi and Mehul Choksi having taken thousands of crores of loans and run away from the country, is for everybody to see. “This is affecting the health of our banks,” he said.

Also, he criticised the government for rising oil prices and questioned why this government was not working towards reducing the oil prices when the price of crude oil across the world was falling. He also endorsed Rahul Gandhi as PM candidate for 2019 elections.  “The time has come that we support Rahul Gandhi in making this country a better place,” he said.

In the rally, former Congress president Sonia Gandhi mounted a sharp attack on the Modi government, charging that the roots of corruption have become stronger in the NDA regime. She also questioned what happened to his “Na khaoonga, na khane doonga” (will not engage in corruption myself, nor allow others) slogan.