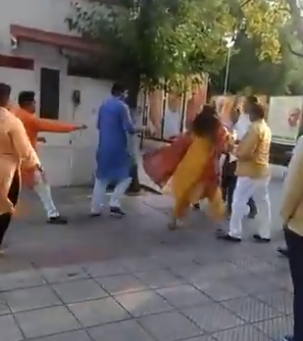 Yesterday, after a meeting with Union minister Prakash Javadekar, BJP’s Mehrauli district chief Azad Singh was seen slapping his wife. A video of the incident has gone viral on social media. As per the party leaders, the duo is involved in a marital discord for many years, Singh has also filed for divorce.

Speaking to a news agency, a senior BJP leader said that the fight took place as soon as they came out of the meeting called by Javadekar, in-charge of Delhi BJP for Assembly elections 2019.

Reports claimed that Delhi BJP president Manoj Tiwari has ordered a panel to look into the incident. “She first abused me and attacked me so I pushed her in self defense” Singh said.

Meanwhile, a senior official in the Delhi Police said that they have not received any complaint from anyone regarding the incident. “Appropriate action will be taken if a complaint is given to us,” he added.