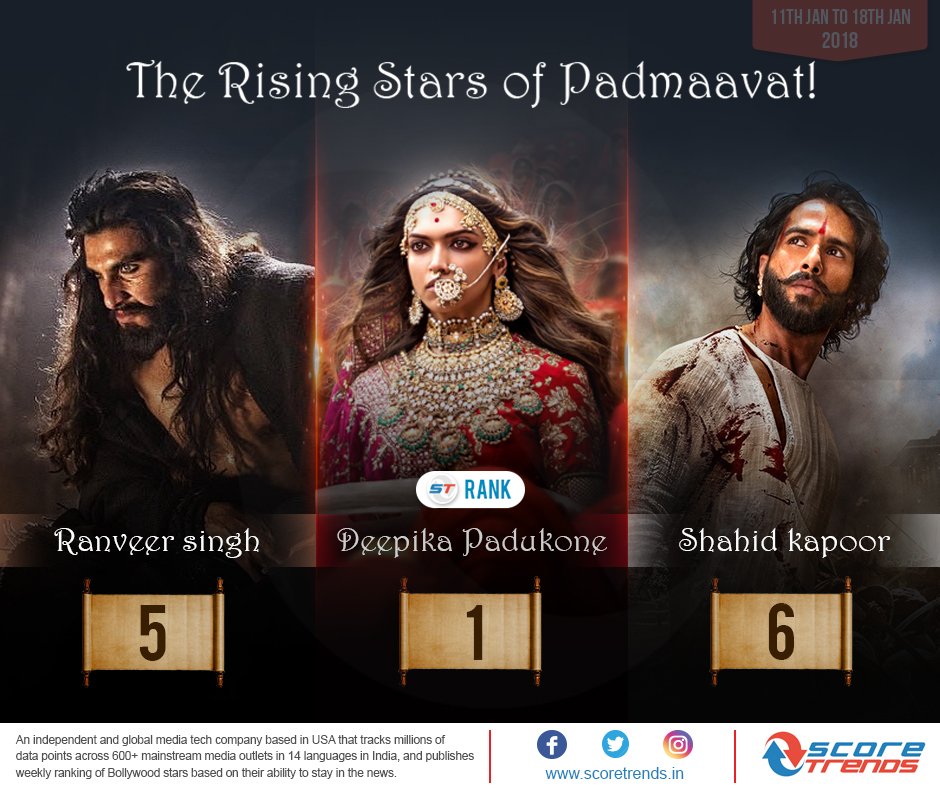 One of the most awaited and talked about film Padmaavat has released and left it’s mark on the audience. Deepika Padukone who portrayed the iconic Rani Padmini has emerged as most talked about celebrity recently among others.

A social media survey by the Score Trends in India hailed Deepika Padukone as the most talked about celebrity of the recent times. While Ranveer Singh and Shahid Kapoor secured the fifth and sixth position respectively.  Deepika Padukone is well ahead of the Padmavat star cast and has been trending at Number one on Twitter too.

The growing popularity of star cast of @filmpadmaavat certainly proves that it's "The Week" of Padmaavat! Retweet If you feel the same. @deepikapadukone @RanveerOfficial @shahidkapoor #Padmaavat #ShahidKapoor #DeepikaPadukone #RanveerSingh pic.twitter.com/NqnLkND7M7

Padmaavat has been the most discussed topic over the recent time and Deepika Padukone has been at the centre of it all. Right from the posters to the trailer and the songs, Deepika Padukone shone as the Rajputani Queen. The iconic avatar of the royal queen has become the face to reckon with.

Owing to the immense fan following of the actress and the anticipation to witness Deepika Padukone as the most beautiful Queen in the history Rani Padmini, the actress took the social media by storm.

Not only did the fans create a one of its kind First Day First Show fan club, but also got it trending. The box office collection of the magnum opus is the testimony of the mighty fandom that the Queen of Bollywood has built for herself.

Raking in 19 crores on day 1 and 32 crores on day 2, Padmaavat’s total collection at the Box office In India stands to be at 56 crores.

Deepika Padukone has been showered with praises from not only the audience and critics but also the entire film fraternity. B-town celebs couldn’t stop gushing about the grace and beauty of the actress.

Veteran actresses like Asha Parekh, Hema Malini, Waheeda Rehman praised the actress with the sweetest of words while Neetu and Rishi Kapoor took to handwritten note and flowers to appreciate Deepika.

Winning hearts with just her eyes, Deepika Padukone has been ruling the Box office as she shoulders one of the greatest epics of the recent times.