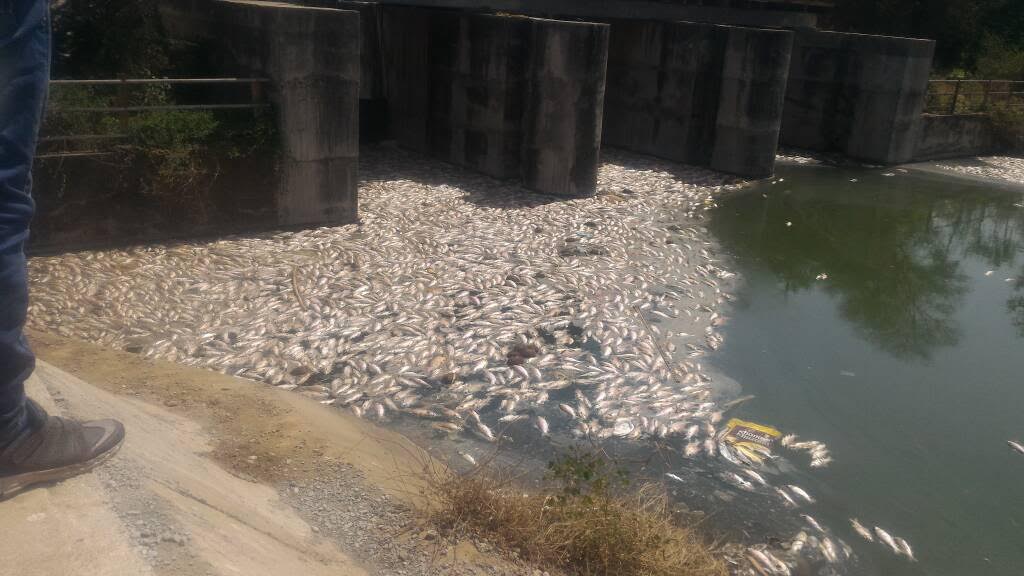 It is a horrific sight near the 75mlt plant of Vadodara Mahanagar Seva Sadan (VMSS) where thousands of fish lying dead inside the canal. What is more alarming is that the foul smell of the dead fish spread around the plant and the same water is supplied to the residents of three water tank areas in Vadodara city through the plant. The place is Bhimpura canal at Sherki where you can feel the foul smell and what you see is the dead fish lying inside the canal water in rotten state. The same water was supplied to the residents of Gorwa, Ellora Park, Subhanpura, Gotri and other adjoining areas through the 75MLT plant. The local councillor of the area Rajesh Aiyre also reached the spot to take stock of the situation and shocked to see the dead fish lying there.

As per the details the 75mlt plant under water resources department of VMSS is there at Sherkhi where the water is taken from the Narmada canal. The water is then filtered and supplied to the areas like Gorwa, Subhanpura, Harinagar and Gotri water tanks and then to nearly five lakh people of the city.

VMSS ward 9 councillor also received the complaints of foul smell water and on Wednesdayhe reached the spot at Sherkhi and shocked to see dead fish lying inside the canal. He then informed the concerned officials and the process of cleaning the canal is underway. He accused the VMSS officials for the dead fish and the polluted water that the people of Vadodara are drinking for last two days. “The scene is horrific at the spot where thousands of fish lying dead inside the canal. What is more alarming that the same water was filtered and then supplied to about five lakhs people of Vadodara city. One side the corporation is talking about smart city and the other side the residents are drinking the polluted water due to dead fish. The Mayor and Commissioner is responsible for this and the steps shall be taken to clean the canal,” said Aiyre.