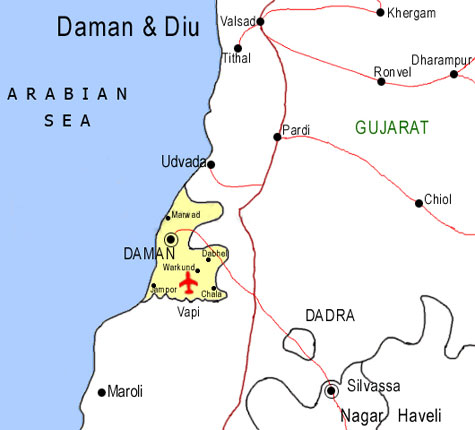 Union Territory Daman-Diu’s Daman city was total bandh on Saturday to protest the recent suggestion of Gujarat high court that centre should merge Daman with Gujarat to ensure prohibition laws are effectively implemented in the dry states.

All the wine shops, restaurants , hotels , markets and petrol pumps voluntarily supported the bandh call by keeping their establishments shut for the day.

According to our sources another reason for the shutdown is that electricity board to be changed to corporation because recent board is suffering in loss. If this will be done then there are chances of increasing electricity prices.

The demonstrators performed peacefully in the city. The Gujarat High Court had recently commented that this union territory Daman should be merged with Gujarat because it has become the biggest source of illegal supply of liquor in Gujarat, where alcohol is banned.

We protest against this idea. “Another protester Umesh Patel told that they are protesting against changing the electricity board to corporation. However, Union Minister of State Administration S.S. Yadav said that these concerns are baseless.

He told reporters, “Daman has no proposal to merge in Gujarat. This is a comment from the High Court. All parties will be consulted before switching the electricity board to the corporation.