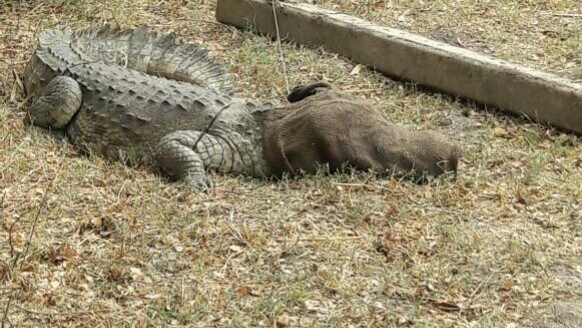 Volunteers of Gujarat Society for Prevention of Cruelty towards Animals (GSPCA) rescued a 7 feet adult crocodile from the human habitat in Vadodara. The crocodile strayed towards the human habitat at Nimeta village on the outskirts of Vadodara city and the volunteers rescued the croc after the call from the villagers.

Around 7 am in the morning people of Nimeta village were shocked to see the full grown crocodile resting near their village. The frightened villagers immediately called the GSPCA and the volunteers reached the spot and rescued the crocodile from there.

“We received the call from the villagers about the crocodile strayed inside human habitat at Nimeta village. We immediately send the nearby volunteers and also the forest department to come there with the rescue equipments. Meanwhile we also guide the villagers not to disturb the crocodile. But as the day progress the crocodile began to move towards the lake and with no choice we rescued it by our own and kept it at Van Chetna Kendra near Harni airport,” said Raj Bhavsar Trustee GSPCA.

The crocodile is full grown adult of 7 feet and is Mass Crocodile species.