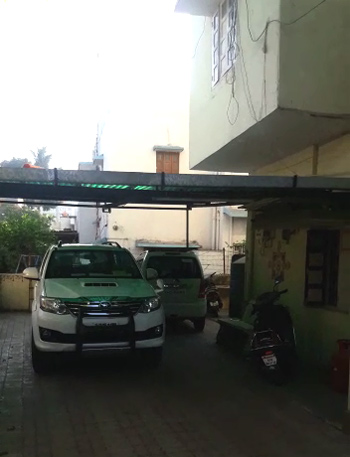 Thieves striked inside the house of Municipal Councillor Chirag Zaveri and decamp with 2.5 lakhs of booty along with them. They locked the Councillor and his wife in the room and decamp with the cash, jewellery and other things. All the incident was recorded in the CCTV camera installed in the house. Manjalpur police is further investigating. Congress Councillor Chirag Zaveri is residing in Lalbaug society in Manjalpur area of the city along with his family. Last night around 2.45am a thief entered inside the house of Zaveri. His mother was sleeping at the ground floor and his son was sleeping at second floor. Zaveri was at the first floor with his wife. The thief entered the house after broke the window on the first floor and first thing he done was locked the Councillor in his room. Then he decamped with jewellery and mobile total of 2.5 lakhs from there. At 4 am Chirag Zaveri woke up and found his door closed and called his son who opened the door. They shocked to see the open cupboard in the next room and came to know that there was a robbery inside their house.

Zaveri immediately called the police and informed them about the incident. The accused was captured in the CCTV camera installed in the house of the Councillor. Chirag Zaveri house was targeted earlier by the thieves but they failed but this time they succeed to take away the jewellery and cash with them.