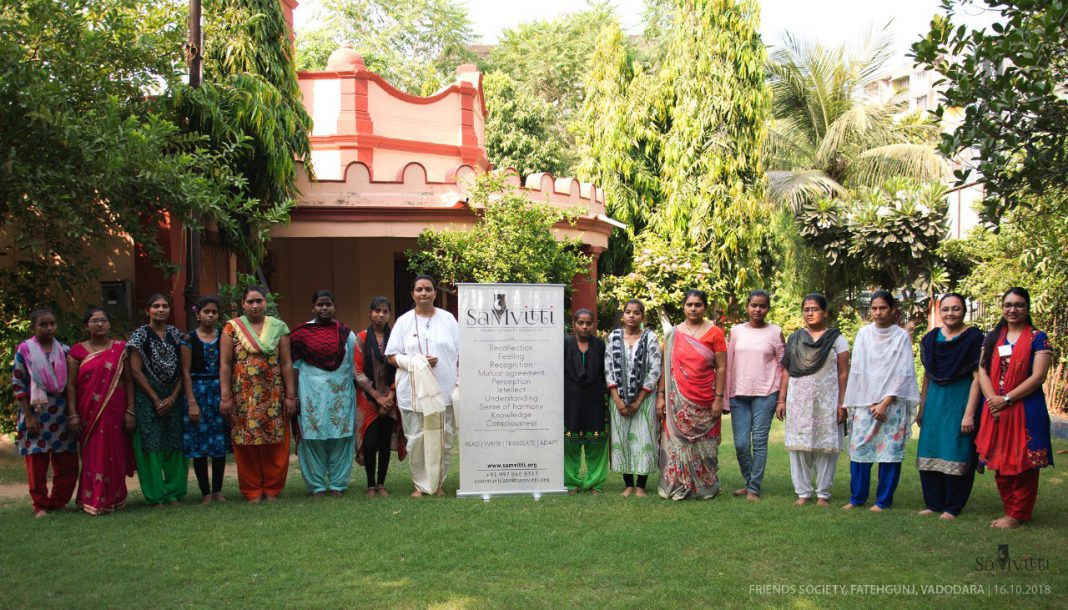 A continued session of  ‘Kunwarbai nu Mameru 2’ by Premanand was dramatized by SahityaMitra Mital Shah to the women-beneficiaries of the Friends Society in Vadodara. The session gives the listeners a self belief in themselves and get to know the power of god.

The crest-jewel of Gujarati‘s legendary tale-teller, Premanand’s  ‘Kunwarbai nu Mameru 2’ is based on the true life-story of poet-saint Narsinh Mehta. Narsinh Mehta was an ardent devotee of Lord Krishna. During his lifetime, he encountered numerous such incidents that if it would have been any ordinary person in his place, then his faith in the Lord would have wavered. Though being in such unfavourable situations, how his worldly deeds got fulfilled by his faith and trust in God is described in this anecdote.

Post the death of his wife and son, Junagadh resident Mehtaji, on fulfilling his fatherly duty, gets his only daughter married-of and sends her to her in-laws. However he is unaware of about the pain and suffering his daughter is going through at her in-laws. Kunwarbai faces many problems because of her father being poor.

According to the story Narsinh Mehta reaches his daughter’s house where he is given an old room. On asking for water to bath he is given piping hot water. However, Mehtaji, engrossed in the Lord’s devotion overcomes all such obstacles with the help of his Lord. In order to add cold water to the hot water for bathing he sings Raga Malhar that brings in rain.

At the time of the ‘Mameru’, Kunwarbai , fearful and frightened comes to her father and requests him to go back if he hasn’t made any arrangements for the ‘Mameru’ and he tells her to trust in the Lord. Her mother-in-law and the grand mother-in-law send a list that cannot be fulfilled by any common man. At that instance Kunwarbai breaks-down in front of her father. Mehtaji remembers Lord Shri Krishna at the time of the Mameru and reminds of God’s help during the various difficulties previously faced in his life.

On listening to the cries of help of the poet-saint, God himself arrives to earth as Damodar Doshi and Lakshmiji as Kamala Sethani. However, none other than Narsinh Mehta can recognise them. The Naagar women are in awe on seeing the attire, garments and pomp of both. When the Lord departs after providing all the material for the daughter’s ‘Mameru’, Kunwarbai’s in-laws also praise her calling her ‘Piyar Panoti’.

The heart of the story is that the devotion to the Lord should never be distracted. SahityaMitra Mital Shah narrated this story by playing the character of Narsinh Mehta through monologue acting. The participants got intellectually enriched as they discussed about the feelings experienced by Narsinh Mehta and Kunwarbai. They also compared the situation with the current scenario and belief that they cannot just sit around with only the belief in God but should work for ourselves. After more discussion, they came to the idea that we must have faith in our goals. It can be a materialistic goal or a goal of our life, our faith on self is very important.