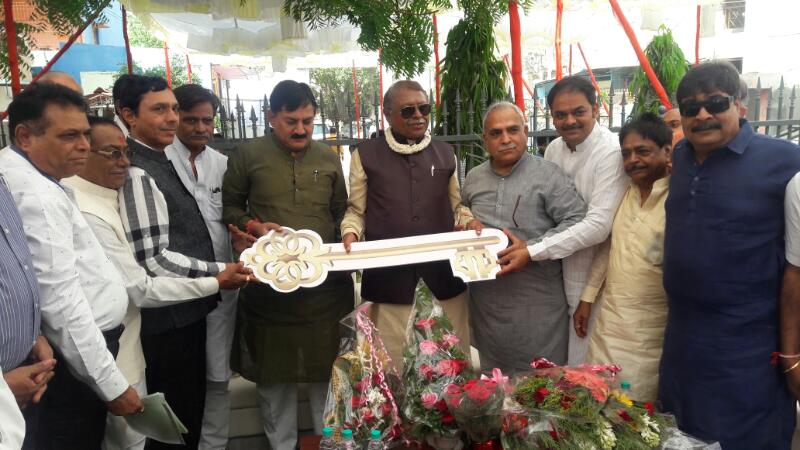 The old office of Vadodara Congress party at Dandiya Bazaar Lakdipul was till date not in its name and was running in the name of one of the leaders of city Congress.

The party lost elections due to the same as the office is not its name and with such belief senior Congress leader dedicated the office to the party on the occasion of his birthday celebrations. After the dedication of the office among the presence of Congress President he said that now the party will win in every election. The things creates a controversy and Pradesh Congress General Secretary Narendra Rawat has to comes out and gives the statement regarding the ownership of the office. He said that the office was the property bought from the money given by the donors. The papers of the office was in the name of daughter in law of Dalsukh Prajapati.

The building is always with the party and that returned to the party. He said all the buildings and properties in the city are in the name of Congress party and not of any individual. The list of the donors at the office is not right as every political party is running with the donations given by the donors and their name is never published. However the Gujarat Party President Bharatsinh Solanki let go the controversy about the ownership of the Congress office and asked not to indulge in such things. He said the office is dedicated to the city congress and now the members can sit and work from there and that is a happy moment for the party.

On the question of arrest Warrant against BJP President Jitu Waghani he denied to answer about on personal questions. He further said that in the upcoming elections Congress will perform and get two third of the seats and back to the power. He gives example about the six seats they won in the Nagarpalika elections which shows that they will win the upcoming elections. He asked to waive the loans for the farmers in Gujarat just like in Uttar Pradesh and said the same will be their election notification in the upcoming elections. The party is ready and also the panels are getting ready, added Solanki.

Before that the senior Congress leaders greet Dalsukh Prajapati on his 77th birthday and welcomed Bharatsinh Solanki on his arrival at the office. The members burst crackers when he arrived was about to comes out of the car but as he has the allergy from the crackers and immediately get inside the car. After the thing the members stopped bursting crackers.