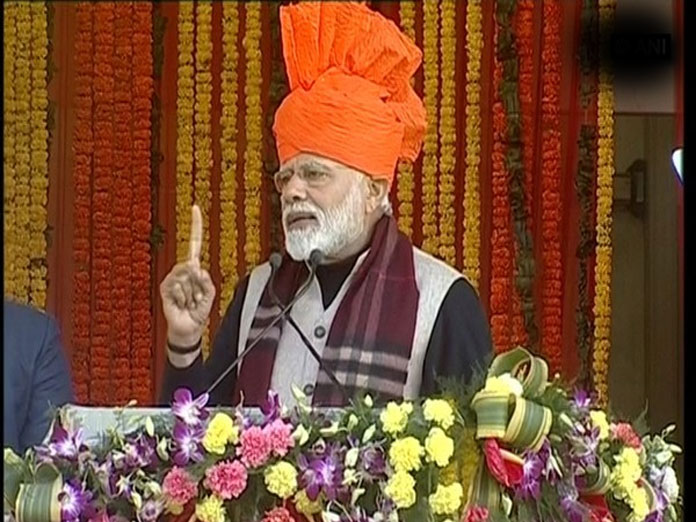 Addressing a public rally here on his arrival after visiting the Ladakh region, Modi began his address by greeting the people in Dogri and assuring them continued support for the development of the region.

Speaking on the union budget, Modi said it would give a fillip to every section of the society, especially farmers.

“Over 12 crore families of farmers who have just two hectares of land will now get an annual direct bank transfer of Rs 6,000. This amount shall be credited to their bank accounts in three equal instalments of Rs 2,000.

“We have ensured elimination of middlemen in rural credit delivery system.”

Modi added: “The Congress party’s promise of debt waiver to farmers is hollow.

“Ten years back, the remote-controlled Congress government spoke of waiving Rs 6 lakh crore debt of farmers. Once in power, the Congress waived off just a pittance…

“They are again speaking of debt waiver to farmers. They have come to power in Madhya Pradesh promising debt waiver. You will be surprised to know that a debt waiver of just Rs 13 has been given to each farmer in the state.

“Similarly, in Rajasthan, even if they honestly fulfill their debt waiver promise, they won’t benefit more than 20 per cent of the people.”

The Prime Minister said when Finance Minister Piyush Goyal was reading out the budget proposals in Parliament, “the faces of Congress leaders turned pale”.

“We have ensured that farmers get the right price for their agricultural produce.

“In addition, we are working hard for the welfare of our soldiers. The Defence budget proposals have crossed 3 lakh crore.”

Speaking of developmental projects in the state, the Prime Minister said: “Work is in progress to establish five medical colleges in Jammu and Kashmir. Once they start functioning, the state will have 500 more seats for medical students.

Modi said the 10 per cent reservation in jobs and educational sectors for economically weak members of general category will benefit the youths in Kashmir too.

He spoke in detail about various development projects inaugurated by him in the past and on Sunday in the Jammu region.

A MoU signed between the NHPC and J&K Power development Corp to build a 850 MW hydro electric power project was exchanged in the presence of the Prime Minister.