Connect Gujarat
#Beyond Just News
More
Home Gujarat College and school students block road near Mahuvad in Padra due to... 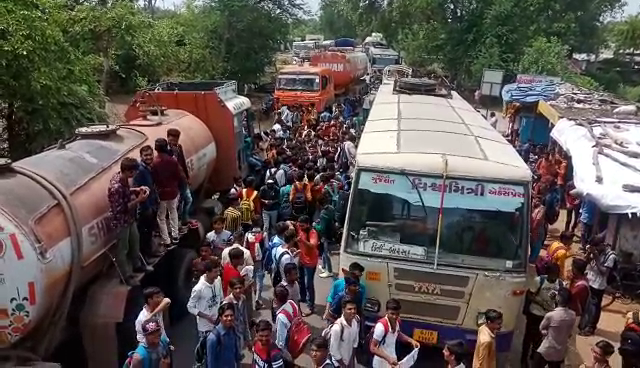 College and school students blocked a road near Mahuvad in Padra due to shortage of bus. They are putting allegations on Padra bus depot for not running the bus and they find it tough to reach their schools and colleges in time. Long traffic jam was also seen on the road as the students were not allowing the vehicles to move even a inch.

As per details the depot is not running the bus as per demand and a sense of discomfort was seen in people. Specially the students going to their colleges and schools raised the issue many times but was in vain. Finally on Tuesday they blocked the road near Mahuvad on Padra Borsad highway and shouted with slogans against the officials of Padra depot.

The students put allegations on the officials of Padra depot for not running buses on desired routes which put them in trouble to reach their schools and colleges in time. Inspite of various representations, the matter is still not resolved and with no options left they blocked the road. They demanded to assign buses in proper way on desired routes.

Police also reached the spot and controlled the situation. However the due to block, the traffic on the route was on a halt and put the commuters in dilemma.