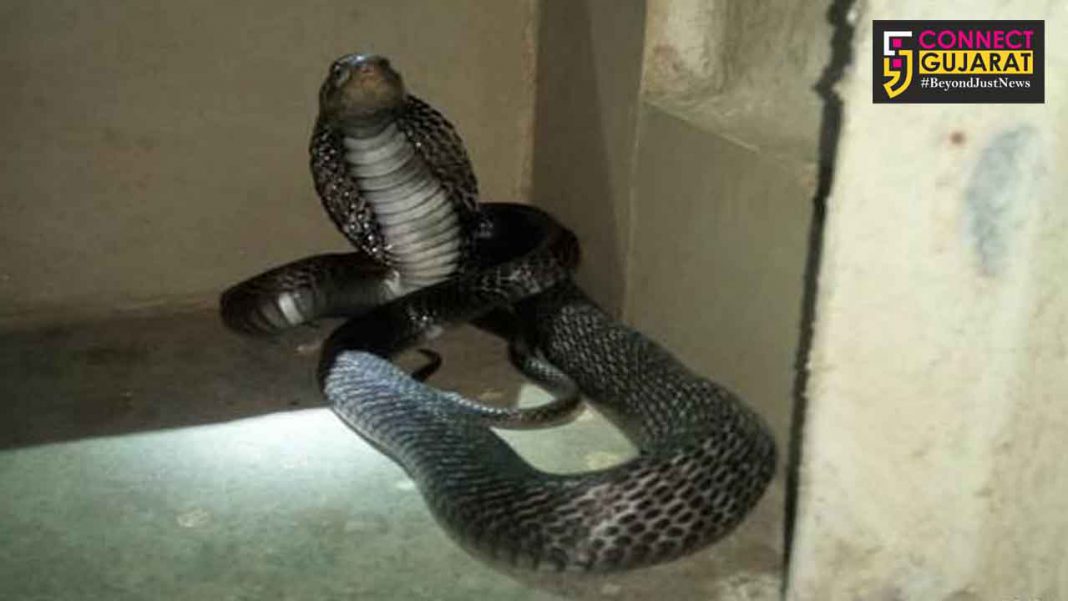 A nearly 3 foot long Cobra was found under a staircase in the ‘F Tower’ of the Asopalav Residential Apartments, in Vadodara. The snake was rescued by Wildlife SOS and later released back into the wild.

In the late hours of Wednesday night the Wildlife SOS 24-hour rescue helpline (+91-9825011117) received a call by the residents of the Asopalav Residential Apartments located in Kalali. The panic striken residents informed about the presence of cobra in the society premises under a staircase in ‘F Tower’ of the residential complex.

A trained snake rescuer from the NGO’s Rapid Response Unit immediately rushed to location. On sensing trouble the cobra flared its hood in an attempt to defend itself. After ensuring that the area was cordoned off the rescuer carefully transferred the snake to a transport carrier, using necessary rescue equipment. The cobra was kept under observation for a few hours and later released back into its natural habitat.

The common cobra (naja naja) is one of the four venomous snake species to be found in the Indian subcontinent. They are revered in Indian mythology and culture and are listed under Schedule II of the Indian Wildlife Protection Act 1972. Large scale deforestation, urbanisation, encroachment and construction, force these reptiles to wander out of their natural habitats and come in contact with humans. Such incidents often result in man-animal conflict as well.

Kartick Satyanarayan, Co-founder and CEO of Wildlife SOS, said “Rescues involving venomous snakes require patience and skill, and we have professionally trained rescuers who are experienced in handling such operations. Cobras seldom bite but will give out a warning sign by displaying their hood. The snake uses its venom primarily to hunt prey like rats, mice and frogs. People get accidentally bitten only when they step on the snake or an untrained person attempts to catch or handle these snakes.”

Raj Bhavsar, Wildlife SOS Project Coordinator and Honorary Secretary GSPCA, said, “We are happy to see that more and more people are choosing to make a conscious decision of calling Wildlife SOS in such situations instead of taking matters into their own hands. The Wildlife SOS Hotline is run with the objective of helping wildlife in distress as well as to assist the public and to sensitize them to the presence of urban wildlife and reptiles.”

Since 2010, Wildlife SOS has been working in collaboration with the Gujarat Society for Prevention of Cruelty to Animals (GSPCA) to rescue wildlife trapped in urban localities, particularly snakes and crocodiles in Gujarat.