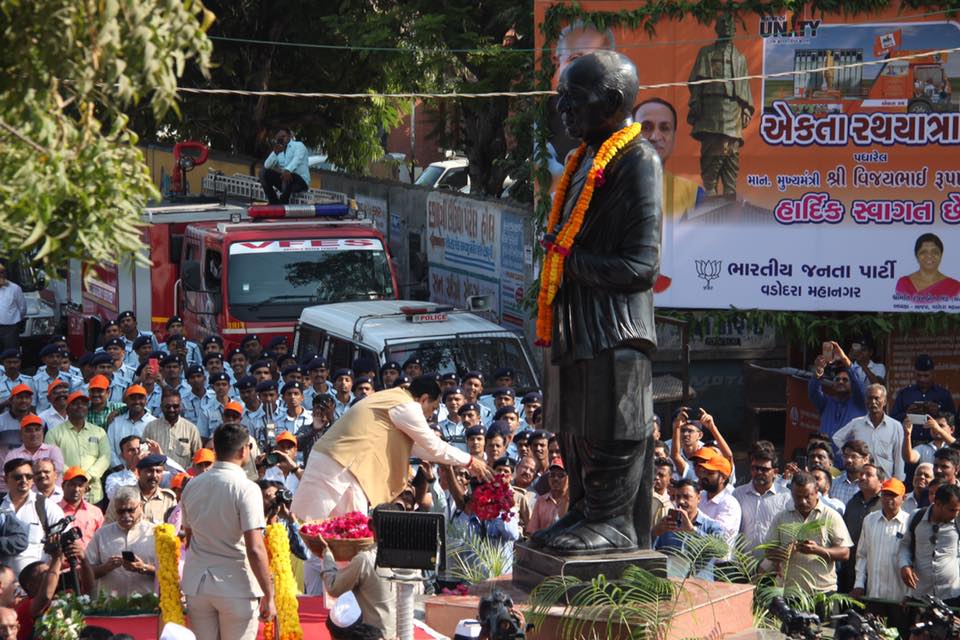 Remember Sardar Patel for his vision on one India

Gujarat CM Vijay Rupani flagged off the Sardar Ekta Rathayatra in Vadodara where he remember Sardar Vallabhbhai Patel for his contribution towards one India. He said it was Sardar Patel who bring all the royals at one stage or else we have to apply for visa to visit Junagadh and Hyderabad. The Ekta Rathayatra was taken out by the VMC before the inauguration of the Statue of Unity on 31st October at Kevadia.

On Friday morning the Rathayatra was flagged off by CM Vijay Rupani from the Sardar Patel idol at Sardar Chowk Chhani. Attacking on Congress he said the party put Sardar in closed doors and in pictures inside the parliament for 40 years after independence. However the BJP give the son of Gujarat a new identity in the form of Statue of Unity which the future generations will remember.

He remember when Sardar came here at Chhani in 1939 and said he gathered 562 Rajwadas and also held a public meeting here. Statue of Unity is the symbol and soul of every citizen of India and made from water, soil and iron collecting from the people. We take forward the vision of Sardar and make India numero uno in the world.

The yatra passed from the areas of Chhani and Sama and ends at Sama sports complex. Traffic was also disrupted for a while due to the yatra.

MP Ranjan Bhatt, Assembly speaker Rajendra Trivedi, Mayor Dr. Jigisha Sheth and other dignitaries joined the yatra along with the youths on bikes and move along the area spreading the message of Sardar.